Alfred Vargas decides not to renew his contract with GMA-7; will be part of ABS-CBN's fantasy series Mutya 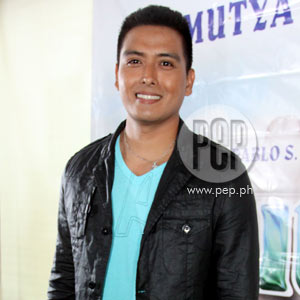 A visibly slimmer Alfred Vargas faced members of the press yesterday, January 27, for the press conference of his upcoming show Mutya.

The event was held at the 9501 restaurant of ABS-CBN. The Kapamilya network's fantasy series will air after Noah on the Primetime Bida block starting this Monday, January 31.

This project marks the return of Alfred to ABS-CBN after seven years. He was last seen on the Kapamilya network for the teleserye Sa Dulo ng Walang Hanggan.

Alfred explained that he did not renew his contract with GMA-7 when it expired in July 2010.

"I am very happy to be here at sobrang saya ng tapings. I am so happy to work again after winning the elections. Sobrang perfect ng show na ito," said the former GMA-7 contract artist with a smile.

What made him accept this project?

"This is a comeback project of sorts for me. I think Mutya is the perfect comeback show for me," he replied.

Will this affect his work as a Quezon City councilor?

"Hindi naman. Ang schedule naman, as long as you take time for each of your priorities, maaayos at maaayos yun."

When asked to describe his role in this show, he replied: "Mutya is about family. It's about the sadness of being alone and how you long for your family.

Alfred then revealed how he managed to lose the excess pounds that he gained during the campaign period.

He also shared that he engaged in sports to help him trim down.

When asked about his scenes with his leading lady Precious Lara Quigaman, Alfred revealed, "Never have I thought in my entire life na magkakaroon ako ng romantic scene underwater.

How difficult was it to shoot a teleserye while grieving his loss?

How does he feel now that, like his character in Mutya, he can be considered the head of his own family in real life?


He also recalled how he felt when his father died.

"Until now, [nag-a-adjust] pa rin tayo, but we have to move on and accept life as it is."

When asked regarding his Valentine's Day plans with his girlfriend Yasmine Espiritu, he said, "I have something prepared. It's going to be a surprise.