PEP EXCLUSIVE Phil Younghusband on his tweet to Angel Locsin: "It wasn't a bet." 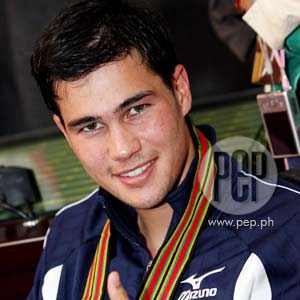 The 23-year-old striker Phil Younghusband refuses to talk about the progress of his proposed date with actress Angel Locsin. "I'm not saying anything. I'm trying to play it down now to make it not such a big thing," he said.

After a whole afternoon of playing on the football field, plus a brief press conference after dinner held at Benguet State University (BSU) in Baguio City, Azkals striker Phil Younghusband, without any fuss, agreed to have a one-on-one interview with PEP (Philippine Entertainment Portal).

The interview was held last February 23 at the lobby of the Baguio Country Club, where team Team Azkals was billeted.

The Team Azkals were in Baguio last February 20 to 26 as part of their training for their game on March 16 in Mongolia. The training in Baguio will help the team to play in a high altitude.

Before going to Mongolia, the team will detour to Japan on March 6 and 7 to prepare the players to play in harsh conditions.

ON FAME. The Filipino-British athlete thanked the fans for their support, especially for accepting the half-Filipinos who are part of the team.

"We never knew this would happen and we never knew it would be like this. I mean, the last five years, we have been trying to find ways of promoting football," said Phil.

The 23-year-old football player had his first step into the limelight here in the Philippines as a model. He also gained popularity when he joined the GMA-7 reality singing contest Celebrity Duets in 2008.

"There was a chance of modeling and endorsements and I was trapped in a management group that wasn't so much into my football skills... Right now, I am so much happier that I am credited for my true gift, my true love rather than just being goodlooking.

"My past management wants me to do a lot of stuff, like singing and a lot of things...that this goodlooking guy... But that was not me, that was out of my comfort zone. I hated it, really. I'm just so happy to be playing football," he admitted.

Phil stressed that he primarily would want to be identified as a football player more than anything else.

"It's different now, 'Oh, you are an Azkal!' I'm proud that I am being recognized now for my talent that I'm good at, than something that is inherited," the striker said with much conviction.

How does he handle popularity?

"I'm speaking on behalf of the players, everyone enjoys attention," Phil said with a smile.

However, Phil added that he and the rest of the team know how to set their priorities.

"Even when I am growing up, I always make sure that my priority is football. And without football, I wouldn't be here where I am now, and the public scene wouldn't be there without the football.

"It's important to balance both and I have to learn it. I mean, our priority is football... The football goes, the celebrity stays, I wouldn't be happy. But if the celebrity goes and the football stays, then we can still survive.

"I guess we just have to strike the balance between football and entertainment and lifestyle all together," Phil explained.

NOT A BET. Phil related the downside of the popularity he experiences now.

"There are people saying that aren't true in the tabloids, like the whole bet thing. It wasn't a bet. It's not true," he said.

Phil was referring to his invitation to Angel Locsin for a Valentine's date on Twitter. The actress replied by saying she was busy on that day but hinted that they could go out next time. (CLICK HERE to read related story.)

The football star told PEP what really happened and why he decided to tweet Angel.

"I was with my brother [James] and I was with the whole team in the airport. They knew nothing about the whole thing. I was just telling my brother, 'Should I tweet Angel for Valentine's? It's coming up, right?'

"You see, Angel is a celebrity in the Philippines but I didn't realize that me tweeting her would make a big issue. It wasn't a bet," stressed Phil.

He added, "That was my reaction after the Mongolia game. And I didn't know that many people watched the Mongolia game. It was a surprise to get that much attention and I've realized I shouldn't have made it public. She's not following me. I don't have friends who knew her."

Phil said that Twitter was his only way to get in touch with Angel at that time.

In a lighter mood, he told PEP that he got anonymous tweets from people asking him out after Angel replied to his tweet.

"'If Angel can't go. I can go.'—I got a lot of them. I didn't realize that the tweet made such noise!" he exclaimed.

Asked if he and Angel went out on a date already, Phil smiled and plainly answered, "I'm not saying anything. I'm trying to play it down now to make it not such a big thing."

Even after a few attempts to ask him about their date, Phil consistently kept his mouth shut and refused to talk about the subject.

Is he attracted to Angel? When did it start?

"I saw Angel in 2006 in Asian Treasures [defunct GMA-7 primetime series]. It was on a holiday, and I was in a hotel and flipped the channels and that's on, and she's really attractive.

Is he courting Angel?

BEING CAREFUL. Phil also shared the lesson he learned from that particular incident, especially on handling what he calls "celebrity life."