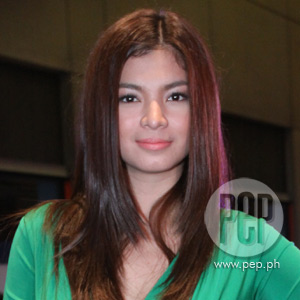 Actress Angel Locsin stressed that although she has gone out on a date with Phil Younghusband, she is still in the "getting-to-know" stage with the popular Azkals football player.

"We're friends. Lumabas kami and siguro nasa getting-to-know stage pa. But it's too soon to answer actually. Ang hirap kasi very public ang nangyayari," said the actress, who was one of the guests of Mark Nicdao's book launch and photo exhibit held last Sunday, March 6, at Greenbelt 5 in Makati City.

Angel describes the football player by saying that he is "very nice and he's a gentleman."

Is it true that she has already met Phil's family members?

There have been rumors that Phil only asked Angel out on a date because of a bet between him and his teammates. However, in an exclusive interview with PEP (Philippine Entertainment Portal), Phil denied this allegation. (CLICK HERE to read related article.)

Angel revealed that she trusts what Phil told her personally when they talked about this issue.

UNDERSTANDING ANGELICA PANGANIBAN. Last March 3, Angelica Panganiban shared her opinions about Phil and the Azkals through the micro-blogging site Twitter. Her posts caused her to engage in a heated exchange with a "fan" of Phil Younghusband. (CLICK HERE to read related article.)

When asked regarding this issue, Angel pointed out: "Ako, I understand Angelica because I know that she's a big fan of football talaga. Siguro wala din ako sa posisyon para mag-comment, pero I understand her.

Angelica also tweeted that Phil and the Azkals should concentrate on playing football instead of appearing in showbiz projects.

However, in an interview aired on Entertainment Live last Saturday, March 5, Phil pointed out that the indie film that he starred in was shot over a year ago and it was only a cameo role.