PEP EXCLUSIVE: Hayden Kho Jr. on girlfriend Dra. Vicki Belo's "he has changed" statement: "My sense of character is stronger." 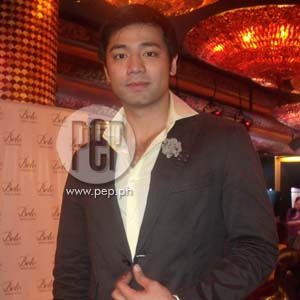 Hayden Kho Jr. describes his first month of training in Paris as "very good and so maganda!" In an interview with PEP (Philippine Entertainment Portal) on April 14, 2011, the entrepreneur says, "It was springtime, early springtime, so maganda—not too cold, not too warm. The flowers [were] all over."

Hayden Kho Jr. is serious about becoming a perfumer.

In the aftermath of the sex video scandal that leaked in May 2009, Hayden's medical license was revoked.

He said then, "The thing is, a few years ago, I got myself into trouble. I faced the darkest moment of my life. And it was very, very difficult for me... But then again, there's a saying, 'Every cloud has a silver lining...'

And he turned to his "second passion after medicine."

He told PEP (Philippine Entertainment Portal) in an exclusive interview held at The Peninsula Manila's Salon de Ning on April 14, "Instead of taking my disapproved license as [a] burden, nag-decide ako, naghanap ako ng isa pang gusto kong gawin. Ayoko naman na parang nakikisawsaw lang sa perfume [industry] so I took it seriously. I went all the way to Paris to train. So right now, I'm a student again."

He enrolled in Cinquieme Sens, a French school that offers classes to develop one's sense of smell and teaches the vocabulary of fragrances.

THRIVING BUSINESS. His business, at present, is "medyo slow." It's something that he already projected, but he's positive that it will pick up soon.

His efforts to improve his product are bound to be noticed by the market soon. In the meantime, "[I] will just wait. That's why I'm having this training, so, expect better things..."

If there's any a piece of advice he can impart regarding scents, what would it be?

"I encourage everyone to form a fragrance wardrobe," he replied.

He chose two brands as his favorites—Jean Paul Gaultier's La Male, a 16-year-old best-selling brand, and Frederic Malle's Noir Epices, or Black Spices—which was introduced in the market in 2000.

STILL-GOING-STRONG ROMANCE. Meanwhile, the topic segued to his on-and-off, four-year relationship with Dra. Vicki, who had mentioned in a previous PEP article that Hayden "is really trying his best to prove that he has changed." (CLICK HERE to read story)

The good-looking celebrity just smiled and said, "Yes, it's improving. I think more than anything else, mas kilala na namin yong imbalances ng isa't isa. We are more patient, and all the expression of love with the giving, the act of service, quality time... basta maganda!"

Lastly, how did he overcome his dark moments?

"I think with heart and a sense of character. My heart was there, pagkatapos alam ko na... Pagkatapos bumagsak ng abo, nakatayo pa rin si Hayden Kho," he said.

He did not forget to thank the people who supported him, "I think yung sense of character, na-develop 'yon because of my friends na nagkaroon ng time noong panahon na mahina si Hayden Kho. But I'm proud to say na I'm stronger, my sense of character is stronger."