Regine Angeles likes contravida role better because "you don't have to cry, you'll just have to beat people up." 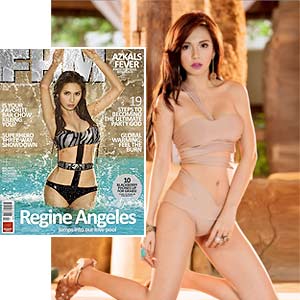 Regine Angeles tells FHM Philippines that her contravida roles have somehow made a mark on the viewers. "They usally tell me how bad I am, how maldita I am on TV," she quips. For more of FHM online, log on to www.FHM.com.ph and become a fan on Facebook, www.facebook.com/FHM.ph.

Most people would often mistake her for another celebrity, and still do not know her name despite her many achievements.

This April, she makes her FHM debut with precisely this in mind. "Five out of ten [people] don't know my name, but they know my face," she says, "This cover will get my name out."

After winning the Be Bench/The Model Search four years ago, being part of a loveteam in the local adaptation of Koreanovela My Girl, and playing a kontrabida role in Tayong Dalawa—Regine is now raring to take on more kontrabida roles.

"It's the one role na may bumabati sa ginagawa ko," she tells FHM, "I've also learned to like it because you don't have to cry, you'll just have to beat people up." She is set to join the cast of TV5's Iskul Bukol.

Regine confesses that off-camera, she is nothing like her onscreen maldita persona. "I've never, in my whole life, been in a catfight. Never pa akong nanabunot ng tao... I honestly have never been a maldita my whole life, but I always get the kontrabida or maldita roles."

She also lets FHM in on the secret of her name: her real first name is Diorella. "I don't really like my first name," she says, sharing that her mom named her after a perfume from Christian Dior, "Ever since I was in grade school di ko talaga siya sinusulat... I just write Regine Angeles."

Speaking of her name, will it be part of this year's list of 100 Sexiest Women in the World? Find out how you can vote for Regine and your other favorite FHM babes by grabbing a copy of the April issue of FHM, available in newsstands, bookstores and supermarkets nationwide for only P140.