Mothers for Others mounts charity event for Bantay Bata 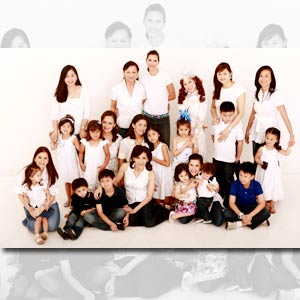 Former model/actress Nanette Medved-Po on working with the women of the group Mothers for Others: "We are very different. We were not close prior to this event, but working together has really shown us a side of each other that really quite goes...We work well together. We have found wonderful friendships in the process. In a way, I think that's one of the things that I will remember most about this project."

In every mom lies a heroine whose kind heart and loving hands moves others for change.

Locally, a group of women joined hands to become "Mothers for Others."

With "Love reigns. Lives change." as their creed, they have mounted a charity event.

This year, the organization of moms chooses ABS-CBN Foundation as its beneficiary.

This move is expected to provide life-saving surgeries to more than 100 children on the critical list of the Bantay Bata 163 Pediatric Heart patients.

"The inspiration for the heart initiative itself came from Manny Padilla," Nanette Medved-Po says.

"He is a heart surgery survivor, and when we discovered that there were quite a few patients on the Bantay Bata list that needed heart surgery, things just fell into place."

Helping pediatric heart patients was not initially a major part of the organization's responsibility.

But after many patients approached the organization, the mothers saw how such an endeavour has helped children get a new lease on life.

It has now become one of the primary objectives of Mothers for Others—and one of its most cherished causes.

As Audrey Zubiri puts it: "As a mother, I think the idea of losing a child unnecessarily is just unthinkable.

"Nowadays, with the technology and talented doctors we have, saving these children is no longer just an option, it is our responsibility."

Kaye Tinga adds, "The Bantay Bata Board is made up of different personalities, but one thing we all have in common is a commitment to help children most in need.

"All of us are parents so this really resonates among us. And we're so lucky that others have seen this and are so willing to help."

In celebration of Mother's Day, the group holds a Charity GalaChampagne Brunch on May 8, 2011 at the Makati Shangri-La Hotel.

This "exclusive by-invitation-only" event is expected to gather approximately 600 members of Manila's most prominent families.

The event will mount a fashion show featuring the kids of celebrities and prominent personalities.

"We are truly inspired by the degree of generosity we found around us," says Nanette.

"Almost everyone we approached to help put this project together said yes immediately and agreed to do it for free, which is remarkable considering the dream we were aspiring to pull off.

"I think when we first conceptualized the idea of the Top 10 Philippine designers coming together in a group show for children, we were being fanciful and optimistic.

"Many of these designers do not work on group shows and certainly not for free.

"But as it turns out, it really does pay to dream and shoot for the stars. We got all the designers on board... plus more!"