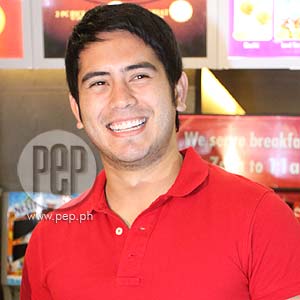 Gerald Anderson says his attempt to join Philippine Basketball Association (PBA) D-League this summer was somehow a fulfillment of his childhood dream.

He confirmed this when PEP.ph (Philippine Entertainment Portal) interviewed him recently.

"Kasi, after the movie [Catch Me, I'm In Love], I wanted to stay fit and healthy, so naki-practice ako sa isang team ng D-League.

"'Yon, may mga opportunities that opened up pero 'yong schedule is everyday."

This rigid schedule was not favorable for Gerald to practice regularly and later play for the team in the real game. His plan was cut short when he had to go to the States for the annual Star Magic Tour.

In our conversation with the former varsity player in General Santos City, he regretted not being able to fully experience playing in the league.

PEP then asked the former Tayong Dalawa actor if he would try his luck again next year. He smiled, "Maybe next time. Malaking bagay 'yon para sa akin. Tingnan natin."

Gerald said he would probably be playing in a basketball court right now if he hadn't succeeded in showbiz.

However, he admitted that he couldn't just let go of his showbiz career, even if an opportunity in basketball beckoned.