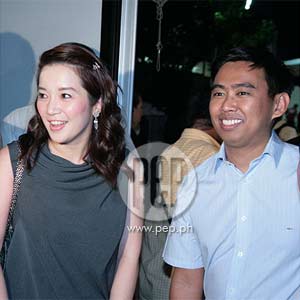 Kris Aquino arrived at around 11:00 p.m. for the February 19 birthday party of Senator Jinggoy Estrada held in a condominium on Shaw Boulevard. She was later seen sharing a table with Makati Mayor Junjun Binay at the venue.

The scions of three political families converged for a night of music and dancing at the birthday party of Senator Jinggoy Estrada held last night (February 19).

Although Senator Jinggoy's birthday was last January 23, he decided to hold a celebration last night at the roofdeck of the Emar Suites on Shaw Boulevard.

At some point in the evening, the son of ex-President Joseph Estrada shared a table with the daughters of former President Corazon Aquino and the daughter of one-time presidential candidate Fernando Poe Jr.

At around 11:00 p.m., Kris arrived with Vice Ganda, her companion during the Taylor Swift concert held earlier that night. At around the same time, Makati Mayor Junjun Binay also walked in to join the festivities.

Kris sat down with Mayor Binay on her right side and Vice on her left. They chatted with Senator Jinggoy and other guests but after a few minutes, they stood up and said goodbye to everyone.

Kris explained she had an early morning flight to Leyte for a medical mission.

When asked if the person he has been dating is stockbroker Len Lopez, she confirmed that it is indeed her.

Later that night, Senator Jinggoy gave a speech, saying: "Ballsy, I am a fan of [President] Noynoy [Aquino]. Three years kami nagkasama sa Senado. He is a hardworking senator. When he comes to the Senate, he is always well-prepared. The Estrada and Aquino families will always be together."

When ABS-CBN reporter Mario Dumaual asked if she expected these compliments from the senator, Ms Ballsy said: "Even when my Mom was still alive, even before she got sick, nagbati na and very forgiving naman si President Erap [Estrada]."

For his part, former President Erap told Senator Jinggoy and the crowd how proud he is of his son's accomplishments.

"I'm proud of you. You have matured as a senator. Mas matinik ka kaysa sa akin! Keep it up."