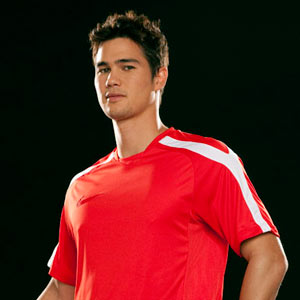 Aside from encouraging the public to live a healthy lifestyle, Azkals star Phil Younghusband is also committed to training aspiring football players and coaches through the Younghusband Football Academy (YFA).

Phil Younghusband is astonished by the surge of public interest in football.

"It is an amazing feeling!" confessed Phil.

"We didn't know that our win in Vietnam would turn all this around. We envisioned soccer to become popular in maybe ten years. We are proud to be representing the country, we have high standards for each other."

The local football star was pertaining to last year's Asean Football Federation (AFF) Suzuki Cup, where the Philippine National Football Team—collectively called the Azkals—pulled off an upset against powerhouse Vietnam.

Clinching the victory transformed the team's fortune almost overnight: from a bunch of hardworking unknown athletes to instant celebrities showered with public adulation.

Currently, the Azkals are in the midst of a series of games against overseas teams before facing Sri Lanka and Kuwait on June 29 and July 3.

The two crucial games are qualifying events that will determine the team's chances to earn a spot in the prestigious World Cup competition.

HEALTHY EATING. Despite juggling his time between sports and showbiz-like commitments, Phil stressed that his priority is still football and his goal is to "help the country someday win a World Cup trophy."

Being an athlete requires Phil to always maintain a healthy lifestyle, which requires strict discipline on the part of each and every member of the Azkals.

"It is important that I represent myself in the right way and I choose the right things. I take pride in being able to promote not only sports but a healthy lifestyle," said Phil, who incidentally is the new endorser of Kenny Rogers Roasters.

Phil—who cited chicken breast and vegetables as his favorite meal—is joined by his brother James, along with surfer Lorraine Lapus and professional triathlete Mica Tantuico, as the new faces of the said restaurant.

In a file interview with PEP.ph (Philippine Entertainment Portal) Phil mentioned that daily training allows him to eat "anything," although, "When I am not playing football, I try to guard well what I eat. I eat a lot of protein and vegetables, minimum carbohydrates and minimum fat, when I am not training."

He also added, "I eat a lot of meals rather than three big meals a day. I try to have six small meals."

SHARING THEIR PASSION. The sudden popularity of football inspired both Phil and James to give lessons to aspiring Filipino players and mentors via the Younghusband Football Academy (YFA).

"We began in November 2009 even before the Azkals were put together. I am the president and James is the vice president. We train players here in Manila, as well as trainers from public school teachers around the country," mentioned Phil.

"Teacher-trainings are free of charge. The program is sustained via support from local government units (LGUs) and public officials. YFA has a pool of trainers who were part of the national soccer teams which previously competed in international cups," he continued.

The two-day train-the-trainers program is inclusive of lectures on competition management, rules and regulations, and drills, among others.

Phil proudly said that the camp has so far trained at least 250 teachers from around the country, including mentors from Tarlac, Bacolod, and Palawan.

During their recent summer camp held in Alabang, the YFA accommodated 150 student enrollees.

Phil always advises the football students to "love the sport" and to constantly persevere regardless of the tough challenges ahead.

Staying "in love and committed to the sport" regardless if it's popular or not, is another lessson Phil wanted his students to always bear in mind.

"The goal is to win," Phil pointed out. "Being an athlete is no easy task. They need to focus, and should keep a healthy lifestyle."