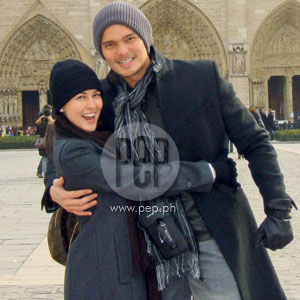 This photo was taken in Paris, with the Notre Dame de Paris or the Notre Dame Cathedral serving as background. The cathedral, also according to Wikipedia, is "a Gothic, Roman Catholic cathedral widely considered one of the finest examples of French Gothic architecture in France and in Europe." (YES! June 2010 issue)

Shortly after the concert, Dingdong and Marian flew, via Doha Qatar, to the land of Marian's birth—Madrid, Spain.

This was to make true on Marian's long-standing promise to her Spanish dad, Francisco Javier Gracia, that she would visit him after six long years of not seeing each other.

The visit was made even more special by the presence of Dingdong, whom Marian got to introduce to her dad for the first time.

But the best part of the trip, Dingdong adds, was seeing dad and daughter happy together: "After almost six years of not being together, e, they were given the chance to be with each other again."

The actress, who lives with her mother, Amalia Rivera, in Cavite, says she took home, not just happy memories, but something more important: her dad's loving words.