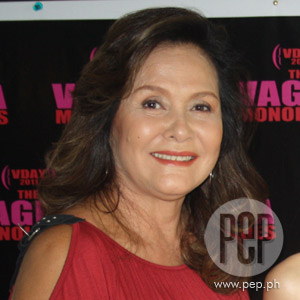 Beauty queen-turned-actress Pilar Pilapil is one of the actresses who agreed to waive her talent fee for the April 29-30 staging of The Vagina Monologues. This plays aims to stop violence against women. Ironically, Pilar became a victim of carjackers last night. Her female companion remains missing.

Yesterday, April 14, Pilar Pilapil was passionately talking about caring for abused women and children. Little did she know that she herself would become a hapless victim of a heinous crime just a few hours later.

PEP (Philippine Entertainment Portal) was present during the press conference of The Vagina Monologues that took place lunchtime yesterday at the Cercio restaurant located at Scout Limbaga, near Tomas Morato, Quezon City.

At around 9:30 pm last night, the beauty queen-turned-actress was rushed to a hospital after being found in Antipolo City with multiple stab wounds. (CLICK HERE to read related story.)

The Bb. Pilipinas-Universe 1967 title holder is one of the women who will be part of the The Vagina Monologues that will be staged on April 29-30 at the Teatrino, Greenhills.

Aside from Pilar, the other actresses who will be part of this event are comedienne Giselle Sanchez, former Pinoy Big Brother housemate Princess Manzon, and theater actresses Kalila Aguilos, Angeli Bayani, and Mailes Kanapi.

Like the other actresses, Pilar agreed to waive her talent fee for the staging of The Vagina Monologues as part of the V-Day celebration that aims to stop violence. The Philippines is one of 130 countries that will be part of the V-Day global activist movement.

In fact, some of the proceeds of the show will go to the Pilar Pilapil Foundation while the rest will go to the Women's Crisis Center, which cares for battered women.

In an intimate interview with members of the press, Pilar shared details about her advocacy.

"Meron akong foundation, my advocacy is for abused women and children. It's called the Pilar Pilapil Foundation, matagal na 'yan. I've just been working quietly. I started it in 1998 but it was registered in 2003. Medyo matagal na rin.

"We have trainings for women and we help abused children that we send to schools to give them spiritual enlightenment. We also do feeding programs to the poor. May medical and dental missions rin for the poor pero quiet lang. Hindi masyadong publicized.

"If I'm not busy with showbiz, I'm busy with the foundation," she said with a smile.

She added, "We also build churches in very depressed areas like Baseco or some parts in Cebu and we use that church as a service area for Sundays and we use that as a school from Monday to Friday. We have teachings and we have feeding programs, medical missions and income generating projects."

Pilar said that she considers this project as a "calling."

She explained why this cause is close to her heart.

"I have had a lot of experience with abused women in this country. I also am able to counsel them since I am a woman and I've been through things in life, too."

When asked if she has plans of returning to showbiz, she said that she has received some offers but she is still "waiting for the right role to come."

Pilar is now in an undisclosed hospital recuperating from the stab wounds she sustained in the carjacking incident.