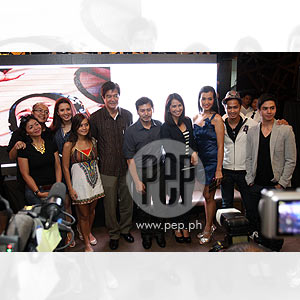 Tourism Secretary Alberto Lim (5th from left) poses with some of the artists who have volunteered to do the DOT music video. Secretary Lim said he hopes the "Pilipinas Tara Na!" program will convince tourists from all parts of the world to visit the Philippines.

Fifty-seven artists have agreed to perform — for free — in a new jingle and music video for the Department of Tourism.

This is part of "Pilipinas, Tara Na!" advocacy program which aims to promote new and traditional tourist spots in the country.

PEP.ph (Philippine Entertainment Portal) was invited to the launch of the jingle held August 5 at the Travel Café and Restaurant at Greenbelt 5 in Makati City.

The team that created the "Biyahe Tayo!" jingle had proposed to the DOT an "updated and expanded version" of the song. Tourism Secretary Lim thought it was a good idea and approved the proposal.

There will be three versions of the jingle featuring different tourist spots in the country.

While only 21 artists volunteered to work on the first project, this time, 57 "established and up-and-coming stars" have committed their time and talent to the music video.

Secretary Lim said he hopes the advocacy will persuade people from all parts of the world to visit the country.

As the DOT loves to say, "Pilipinas, Tara Na!"