An adventure-packed Saturday for moms and kids 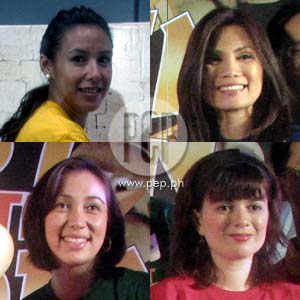 For most working moms, weekends are the only time they get to bond with their kids.

So, it was only fitting that last Saturday, August 6, Jollibee invited moms and kids to the Ronac Arts Center in Greenhills to search for the "golden nugget."

Celebrity moms and their kids led the four different teams in a race to get the key that would open the mysterious treasure chest.

Sportscaster Patricia Bermudez-Hizon tagged along her sons Vicente and Paul, both mini versions of their dad Vince Hizon, to join the blue team.

The green team, on the other hand, was represented by former model Romina Urra-Gonzalez and her eldest daughter Carmen, who's already a looker at seven years.

Romina is best remembered for her TV appearance as one of the judges in ABS-CBN's Be Bench Model Search, which aired in 2007 and launched the showbiz careers of Carlo Guevarra and Regine Angeles.

Christine and her team eventually won the game which involved a series of physical and mental challenges such as charades, Pictionary, trivia quiz and a lot more.

The winning team got the chance to open the treasure chest which revealed the new Chicken Nugget Crunchers.

All in all, moms and kids enjoyed this fun-filled day, capped off with a delicious lunch that included a sampling of Jollibee's latest food product.