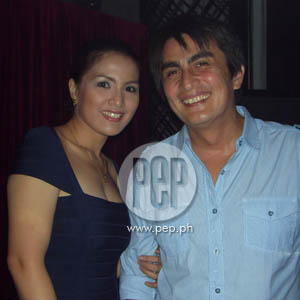 Bernadette Allyson and Gary Estrada are a strong and happy couple who have endured more than a decade of trials. Today, as Gary takes on his new role as provincial board member of Quezon, their beautiful family takes on the challenge of living apart. Bernadette says in order to keep the marriage and family bond strong, one has to learn the art of "holding on."

It has been over a decade since Gary Estrada and Bernadette Allyson first met and fell in love on the set of the movie Ikaw Naman ang Iiyak.

Since then, their family has grown from a handsome twosome to a beautiful brood of five with three daughters Garielle, Gabby, and Gianna.

At the Valii launch in Manila Peninsula Hotel last July 20, PEP (Philippine Entertainment Portal) caught up with the couple who gamely talked about the family's current status.

"The kids are okay. My three daughters are going to school. I guess my wife is really busy with that," says Gary about the four most important women in his life.

"Ako naman, e, minsan nakakapaghatid pa [despite] my very busy schedule. Kasi right now I'm in the province working as a provincial board member," he added.

Gary, whose real name is Gary Jason Ejercito-Estrada, was elected board member of Quezon's second district last year. He spends more time in the province now than in the family's city residence.

Bernadette says of the family's new schedule, "We (she and the kids) stay here (Metro Manila) weekdays so weekends we go to the farm since talagang kailangan. Kasi he's there usually, e, so kailangan kami naman yung pupunta.

"And the kids like it in the farm kasi may mga horse sila dun so they really look forward to going to the province."

Gary adds, "Actually not only horses. My kids enjoy all the animals I put in the farm...mga pato.

Having found interest in horses, are any of their kids training to become a professional equestrienne?

"Wala pa naman but they all like riding their horse so hindi ko alam. [Maybe] in the future," Bernadette replied.

"And medyo she's strong naman and she hits the ball well," she revealed about nine-year-old Garielle.

During their weekends in Quezon, Bernadette and the kids also try to participate in Gary's public duties.

"I can understand where his passion is coming from dahil masarap talagang tumulong sa tao. Kahit na maliit na bagay like nebulizer, you know na it can help a lot of people," says Bernadette about how she is slowly getting the hang of her husband's new role.

STRONG AND STEADY. Bernadette stars in the TV5 series Bagets: Just Got Lucky. She admitted that she had a hard time adjusting to their new setup now that Gary spends most of his days away from home.

In a previous article posted here on PEP.ph, Bernadette revealed her disappointment about her husband's lack of time, albeit unintentional, for their relationship. (CLICK HERE to read related story)

However, the couple maintains a strong bond and steady partnership.

The secret, as Gary says, is to realize that "there is no perfect relationship."

We listened to the couple finish off each other's sentences as they explained how they continue to make their marriage and family bond stronger.

"For us we're just like going through it day by day," says Gary.

"And I guess we just love each other. Yung love dapat nandun parati."

"At saka communication," Bernadette remarked, "and the fact that you know that you got married, parang there's no turning back. Kasi siya ganun siya [mag-isip].

"Naiintindihan ko na 'yon na even if you argue, if there are fights, at the end of the day kailangan mong isipin that you have to work it out and you cannot parang just say..."

"Just give up," Gary said, ending his wife's statement.

"So, every time you fight or argue, whatever you do, don't think about getting separated or yung maghihiwalay. Kailangan mag-work out talaga,"

"That word shouldn't be an option," added Gary.

HANDS-ON MOMMY. Aside from her showbiz work, Bernadette is also preoccupied with looking after their three daughters.

"Kaya hindi ko na masyadong inaabala ang aking asawa," says Gary who only has praises for his superwoman of a wife.

"So, since hindi naman na ako busy like before, siyempre I think I owe it to them as their mother na maging hands-on at alagaan talaga sila and the family."