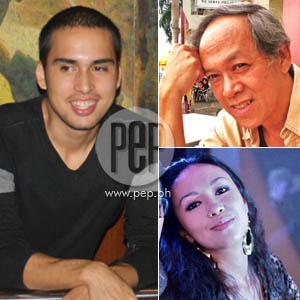 "Here's my reluctant participation in the artists sector's outcry against filmmaker Rafa Santos:

"Activists in the 70's fought for freedom of expression. Thanks to Lino Brocka and his generation of brave freedom fighters, we are now enjoying freedom of speech and freedom of artistic expression.

"Rafa Santos had all the right to say what he felt like saying on national television; so do all the theater artists who reacted to Santos' irresponsible and wrong choice of words to describe what is a most passionate, dedicated and disciplined artists' sector.

"In his insensitivity and his careless use of the spoken language, he only has himself to blame. This should be one lesson in life that he should never forget and which should guide him in his future actions and public speeches.

"If his apologies are to be believed, then he should now begin to learn how to match the words that come out of his mouth with his real intentions, and make both the words and intentions crystal-clear.

"He should also try to get to know very well the sector he is talking about, whether out of admiration or out of disgust; i.e. never, never, never again, jokingly, much more, seriously, throw any generalized derogatory remark against the theater artists.

"He should know that we are a proud, unafraid, boisterous, highly-charged, ultra-sensitive, venomous species when provoked to defend our territory. But in our sober, lucid and stable moments, we are the most generous, loving, caring, soft-hearted, decent, prim and proper, disciplined, obedient, humble and lovable human beings.

"In the impassioned growling and hurling of burning spits of fire by the slighted theater artists—Hurray! My deepest and sincerest admiration for your collective display of love and respect for our craft.

"Just a little word of unsolicited advice: after the uncontrolled theatrical arias, sometimes betraying some of our own kind of arrogance and self-righteousness, let us now settle down, take a deep breath, and figure out what all that really was.

"Why are we so indignant and so affected by the words of a neophyte, a beginning filmmaker? Most importantly, what can we do to uplift and upgrade the image and reputation of theater artists?

"And it also makes me wonder what the outsiders, the 'uzis' (mga usisera), the non-artists and the critics of the artists make out of this free-for-all, uncensored and free-flowing downpour of expletives, name-calling by the artists against another artist, albeit a beginning artist.

"Does our public outcry and courageous display of anger and disgust give our admiring public and our critics a positive or negative image of us, the theater people? Time to reflect, maybe, and then act."

"We deplore any acts/statements that will insult theatre actors, artists, and staff.

"We thrive on 'pakikisama' without being exploitative. We only have respect for theatre artists whose real consolation, after a grueling work, is the adulation and satisfaction of his peers and co-workers.

"Any irresponsible statement derogatory to the theatre profession will not be tolerated."

"Well, let me just say, it was a poor choice of words, and yes, it was offensive, although he obviously meant to praise us theatre actors.

"It was a joke gone bad. But he has apologized and so, let's move forward. Theater has bigger problems..."

"I saw the clip [video of Rafa]. He was in fact complimenting theater people. I got the humor. If said on Leno, Letterman, Conan O'Brien, and the like, his comment would have been kuwela.

"Rafa will learn fast that everything here is relational. Praise is always better than patama.

"The boy apologized. I urge fellow theater folk to be gracious. We all have had a foot-in-mouth moment."

"We, members of the Philippine Theater Actors Guild (TAG), are outraged.

"The insensitive statements of Rafael Santos do not only demean our craft as actors but reinforce the prevalent view with which society, the entertainment industry in particular, regards theater actors and artists—as mere commodities in the realm of television and filmmaking. Rafael Santos has now become the very image of the contempt and ridicule thrown our way as a community.

"As theater actors, we go through intensive training and harness our discipline to hone and continually develop our craft. It is this same discipline we bring to any project and share willingly in every endeavor we are involved in.

"The 'cat food and Sky Flakes' metaphor speaks of the crumbs fed to us, which we have been forced to endure.

"The controversy sparked by his irresponsible remarks, intended as a joke perhaps, but one that failed terribly, is a reflection of an industry that has long lost its soul to commercialism and profit. The theater artist has become an aliping namamahay—a slave to a fiefdom ruled by commerce and mediocrity.

"We have had enough! We are now claiming our space.

"We demand an apology from Rafael Santos. We demand that this apology be addressed to all theater actors, and be made in the same venue that he has maligned us.

"But beyond this controversy, it is imperative to set the direction that TAG envisions for our community: a community of professionals that is respected and acknowledged in the art and entertainment industry.

"We are united in our diversity and determined to collectively act and realize our dream—respect for the theater actor.

"In the end, we dare claim that a society who respects its artists is a society that keeps its soul.

Dagdag na impormasyon ni Aguilos sa kanyang post sa kanyang Facebook account, "People on the theatre guild page are now signing this document. We intend to get as many signatures as possible."

"Although Mr. (Rafa) Santos wrote his apologies, we, the artists of Gantimpala Theater, are still up in arms!

"We have been in the business of giving good theater for more than 3 decades and this is the first time that we find ourselves assaulted insensitively by someone who has not even proven his worth yet in the field of cinema.

"Indeed, you had your 15 minutes of fame with your arrogance and callousness. Shame on you!"