Vincent Bueno bridges the best of two worlds through his music 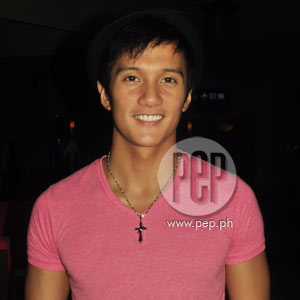 "In here you really have to have faith and patience. Patience builds an active heart... In here I learned how to be very forgiving. Kasi grumpy akong tao. I know how many things could be better in the Philippines. But you cannot dictate to them, 'Hey you have to be this and that.' You have to change. You have to be the example of the change that you want to happen." Hurled by music from Vienna to the Philippines, Vincent

Minutes away from his first set, Vincent Bueno doubted if he could get up on stage to perform in front of a half-filled Teatrino on a Friday night.

He just lost his voice. It wasn't exactly brought about by that nerve-wracking moment right before one of his first major gigs began, but simply because the last two days of rehearsals had been taxing and trying.

"It was a relief talaga... I think it was a wonder na nakakanta pa ako," recalls Vincent, unburdened, three days after his Got Fridays concert in Greenhills.

Truth be told, when the lights were on him and the stage was his, not an inch of his body manifested fatigue; neither did his voice fail him. Instead, his energy was infectious. As he had been doing for most of his life, performing always turns out effortlessly easy for the talented Vincent Bueno.

That he can emphatically sing and insanely dance, rap, beatbox, and create soulful rhythm and blues or ballads is still unknown to most Filipinos. It has only been about a year since Vincent officially came to the Philippines to perform after gaining popularity and respect in Vienna where the community of Filipinos take pride in his craft. [CLICK HERE to read related story]

Vincent was born to and brought up by full-blooded Filipino parents— his father is a musician, his mother is a nurse—who met and decided to build their family in Vienna. Hence, Vincent grew up immersed in the Austrian way of life. Such explains why his first language is in fact German and why up to now Vincent is still bemused and fascinated by the stark disparity between the two cultures.

Growing up Austrian and Filipino at the same time meant straddling two cultures.

"It's difficult. I say it's difficult because you as a Filipino? You're full blooded Filipino, right? And you grow up in a country where you know the language, you know the culture, you know the mentality but still there's something [missing]... it's not really home," relays Vincent.

At some point, his Austrian background and Filipino heritage brought about a crisis within him.

"To be very honest, hindi ko nga alam, e. Dati, I didn't know if I was Austrian or Filipino inside."

While his foreign peers would affirm his unaccented German and tell him that he has adapted to their culture so well, Vincent mentions of the countless misunderstandings between him and his father who never failed to remind him of Filipino values—respect above all.

To this he would always retort, "'Pa, pero andito tayo."

Having lived in the Philippines over the past year has enabled him to connect with the Filipino in him. For some reason, everything suddenly makes sense. "Now I see that everything na nangyari... was just for the good," says Vincent with a calmness about his expression.

While choosing to stay in the country has healed his soul considerably, Vincent has yet to completely adjust to the way of life in Manila. He initially noticed that the petulant and uptight demeanor of most Austrians contrasts to the good-humored and carefree nature of most Filipinos.

Without meaning to look down on either cultures, Vincent reckons that what the other has, the other lacks. "Walang sense of urgency [yung ibang Filipinos]. But they are so polite! Sanay ako sa grumpy! Parating grumpy [sa Austria]."

He catches himself wondering, "Bakit lahat naka-ngiti sa akin [dito]? And everyone's so kind! I realized na this adjustment is so important for my soul."

Vincent feels grateful for witnessing and experiencing the imperfections of both cultures in such a way that he can learn from them and come out a better person. "It's a choice to make the best out of it. To take the thing and puwede ka mainis or talagang pipilitin mo yung sarili mo until you say, 'This is good for me. Kasi ako yung mago-grow, 'di ba?"

"And ngayon, I will go back to Vienna for one month to make just five shows there and visit my parents for Christmas but I'm really thinking if I want to go back. I love it here!"

Asked if he understands and appreciates his father now more than ever, Vincent smiles and replies, "Once we had a conversation in Skype, sinabi ko pa, 'Alam mo lahat ng mga tao, parang ikaw dito.' Dun siya natuwa."

"Now, it makes so much sense why. And all of this respect thing, now I understand."

BACKSTORY. Vincent's musical career was on a roll in Vienna two years back when he won Musical! The Show, a competition wherein contestants bested each other in performing songs from musicals. Vincent emerged as the grand winner. Later, he released an album in Vienna.

"It was a nice album but I could not do the music that I wanted," admits Vincent.

"I was really frustrated but I was blessed with the opportunity. But even with the record company, hindi siya talaga yung gusto kong mangyari."

While in Vienna, Vincent's musical journey was marked with triumphs and trials. He started off obtaining formal musical training at 16 when he auditioned and was eventually accepted at a music conservatory which introduced him to the world of theatre. Before entering the school however, Vincent had already started singing and dancing even as a kid. He knew where his heart lay.

"Filipinos [in Vienna] knew me because I was very active in events just to push myself... I was so driven just to perform. Besides school, I just wanted to perform.

"Yung mga Pinoy, kilala ako dun. But it was always a thing that they would support me and they would say, 'A, ang galing naman ni Vince.' Pero sobrang, I think nayabangan sila sa akin.

"Ngayon ko lang talaga natutunan yung what it means to come down in a way that they would understand you.

After winning Musical!, Vincent was offered an opportunity in the Philippines by director Laurenti Dyogi. However, it was untimely because Vincent was tied down to an existing contract in Vienna. He was compelled to stay.

Everything fell in place eventually, when the said contract ended. In August 2010, Vincent came to the Philippines for a visit and this was when he met Marie Gutierrez, who in turn introduced him to talent manager Arnold Vegafria.

Apart from aspiring to perform and collaborate with other local artists in the industry, Vincent's primary reason for settling down in the Philippines is to see the country.

Since he's only in his early twenties, anything's possible for the supercharged dynamo.

CHOOSE PHILIPPINES. At his Got Fridays concert, Vincent was at his best performing his original compositions. Co-artist and thespian Gian Magdangal remarks, "I like his passion. [I like] that he's courageous enough to sing the originals.

His latest compositions which proved to be the highlight of Got Fridays were "Tunay na Pag-ibig," a ballad inspired by a Tagalog romantic flick; "True Love" and "Explode" which are both exhilarating songs proclaiming Vincent's revived faith in God.

For someone born and raised in Austria, Vincent is quintessentially Filipino—from his sun-kissed skin to his fluent conversational Tagalog (thanks to his father). One would catch him using terms such as "bad trip" or "kilig factor," and if swayed to watch soap operas or Filipino romantic comedies, Vincent admits to gushing and being inspired to write a love song.

Like most Filipinos, Vincent loves his ballads and OPM, Gary Valenciano and Sana Maulit Muli topping his list.

"Pinoys will always be Pinoys anywhere around the world," he says on a final note.

With a talent like his, we know he's very much Filipino.