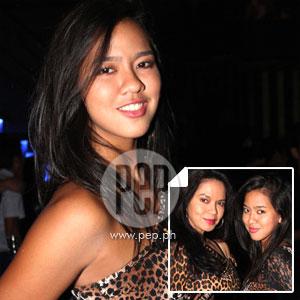 "Ngayon, in real life, bumalik ako sa city, parang na-realize ko na ang comfort zone ko talaga is the island. Dun talaga yung buhay ko." 20-year old Mara Yokohama has been a surfer since she was 6. Being cast away in the island of San Vicente, Palawan for 36 days has made her realize that she was, in fact, home. (Inset) Mara and her mother Maria Isabel Lopez

Most celebrity scions find it difficult to move out of the shadows of their famous parents.

Depending on how they look at it, such a birthright can be deemed a blessing or a curse.

Mara Yokohama doesn't seem to be fazed by such issues at all. Her mother, Maria Isabel Lopez, is a feisty and controversial Bb. Pilipinas-Universe (1982) and a prizewinning actress.

While she takes after her mother's morena appeal and smoking bod, Mara is her own person. Whereas her mother's realm is in pageants, modeling stints, and films, Mara is in her element in the outdoors— the beach, to be exact— where she could be conquering the waves with a surfboard beneath her feet.

She is in every sense agile, enduring, and athletic.

Which is why when the producers of Survivor Philippines Celebrity Doubles Showdown called her up, Mara could not for the life of her turn down the offer. The problem, however, was convincing her glamorous, diva of a mother to join her in the game that required its latest set of contestants to come in pairs.

"They wanted a mother-daughter tandem," says Mara, recalling how desperate she was to participate in the competition, which she had set her sights on years ago.

"Kasi ako, being in an island is my comfort zone. Lumaki ako sa isla kasi I'm a surfer ever since I was 6."

It was not easy to talk her mom Maribel into joining the reality show that required them to set aside their convenient and comfortable lives for 36 days. They were to live the nomadic way sans shelter, warm food, electricity, and clothing.

The actress' career was on a roll at that time as she was shooting a teleserye with ABS-CBN, and working on a handful of films.

It was Mara's insistent pleading, 'Mommy, don't take this away from me!' that finally got to her.

"So, ano ginawa ko? Nag-tiis. It's not about me. It's all about Mara, for Mara, with Mara," says Maribel without much regret.

SURVIVING MOM. And so it happened. Suvivor Philippines Season 4 finally had a mother-daughter tandem—with Mara as the youngest, and Maribel as the oldest among the 10 pairs.

Although her Mom became her security blanket that made the tough experience bearable, Mara admits that they also fought a lot.

CHALLENGES. Mara, who was born in California and was raised in Japan, was taught by her father Hiroshi Yokohama to surf at an early age. At 6 years old, she was tagged by the GMA Network show Extra! Extra! as "The Youngest Filipina Surfer."

The surfing addict who also happens to be a scuba diver was determined from the start that she would endure the physical challenges of the game. Being young and hale was an advantage for tests that required stamina and endurance.

Though she gives herself a pat on the back for getting past the challenges, Mara admits starving at some point. "Siguro hindi ko lang inexpect na magugutom ako nang sobra!"

"Aside from the not eating, I was very comfortable with everything else kasi I always go to the beach— me and my Dad, we always have. Komportable na ako sa ganung environment."

Mara, however, mentions of the real rough patch in the game of outsmarting and outlasting her competitors— "Survivor's not just a physical game. It's really a mental game and an emotional game.

"Kasi everyone there wants to stay in the game, wants to be the sole Survivor, di ba?

"So you always think, 'Am I gonna be next to be voted out?' You're always thinking of that inside your head and siyempre you get emotional din especially for me kasi I really wanted to stay in the game.

"You really have to find a way to stay and how to convince people to let you stay."

FRIENDSHIPS GAINED. Survivor is infamous for its castaways scheming against each other. It is a game of deceit, of forging alliances, and of eventually burning bridges if necessary, only to emerge as the sole Survivor in the end.

While the reality show has taught her a thing or two about knowing who to trust, Mara has created friendships among her so-called adversaries. She particularly became close to the pair of John Odulio and Arnold Aninion—both members of the Philippine Volcanoes rugby team.

"You can be friends with them but you're not really sure if you can trust them. Pero I could say naman in the island that I was able to make real friends na until ngayon, kahit na tapos na ang Survivor, very close pa rin kami."

Mara and Arnold's closeness is undeniable. To date, the two are reportedly an item.

Although she was initially hesitant to clarify the real score between them, Mara eventually relayed, "Yung relationship namin inside the island ... we became best friends in the island. Si Arnold as a person is very special to me."

"We only started out as friends talaga. Until later on, na-develop na lang yung relationship na yun kasi we only had each other.

"With Arnold naman, I guess naging close kami kasi magkasundo kami. We like doing a lot. Sa island, as long as we're together, hindi kami nabo-bore."

STEADFAST FAITH. More than bonds formed and special friendships gained, Mara's grueling but rewarding experience in Palawan has taught her what truly keeps her sane and strong.

"Inside the island talagang pinoprotektahan ako ni God every time. I felt really close to God in the game. I could say I grew up emotionally and spiritually.

"Very grateful ako kay God that he gave me this blessing kasi I learned so much about myself. And of course, yung priceless na friendship with other people and a stronger relationship with my Mom."

Survivor may perhaps be Mara's most life-changing trial so far. People have in fact been telling her that she has matured considerably since the ordeal.

"Everyone's saying I grew up in Suvivor. The Mara in day 1 and the Mara now is very different, kasi in the island, you find out a lot about yourself.

On a last note she tells about what kept her going the whole time.

"Belief in God and belief in myself. That I can do it. Siyempre for my family din.

"Pero mostly because I really wanna show the world that I can be the next sole Survivor. Alam ko naman na outside Survivor, I have always been a survivor—always!"