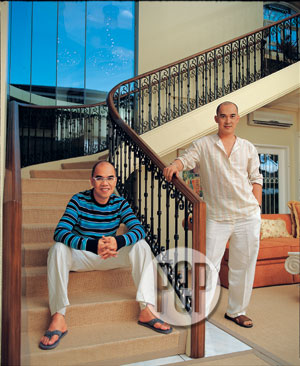 Posing for the camera is "all about presence," Boy quips. "It's all about attitude. I know that's all I have." As he and Bong try different poses for this shot, Boy explains the design of the staircase: "This is the most suwerte." But he admits he doesn't follow everything that feng shui dictates: "Gusto ko lang the things that make me comfortable."

He's the multi-awarded host of two popular television programs—The Buzz (live every Sunday afternoon) and Homeboy (every weekday mornings). But Boy Abunda takes pride in his probinsiyano roots, proclaiming that he's from the town of Borongan, in Eastern Samar.

He has really come a long way!

In addition to his grand highland home in Lipa, Batangas, he has added another piece of property to his name. This one is located in an exclusive subdivision in Commonwealth, Quezon City.

"My God! This is blood, sweat, and tears!" he exclaims during the YES! magazine photo shoot. "Pinag-ipunan ko talaga."

Boy admits that at first he really did not want to build a house in Manila. But he and Bong Quintana, his partner of 23 years, were soon convinced by his mother, Nanay Lesing.

"I didn't want to grow old talaga in Manila," he says, then adds jokingly "When I'm old and gray, and fabulous, I want to go home to the province, because this city is not kind to old prostitutes, 'di ba? Yung plano ko lang noon, I'm gonna go to Lipa, then come to Manila for a week, stay in a hotel, and then go. But it was my mother who explained to us: 'You have to build your own house in Manila.'And that explains this house. So the happiest woman, aside from us, is really Nanay."

Boy and Bong gave this project their one hundred percent and had a lot of fun in the process. The result? A beautiful home filled with warm colors and a relaxing ambiance.