British boy band gives a shoutout to Manny Pacquiao: "We'd love you to be the fifth member of Blake!" 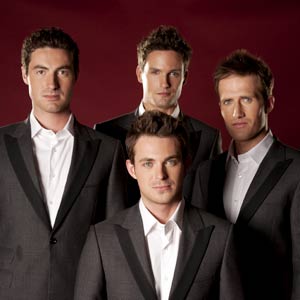 When asked about which artists they dream of collaborating with in the future, Jules Knight, baritone of British boy band Blake answers, "For some time now, we wanted Manny Pacquiao to be our fifth member. We're very much hoping that he might agree!"

"We know we're in good company here in Manila."

The British quartet Blake, known for their classical renditions of cover hits "Chasing Cars" by Snow Patrol and "With or Without You" by U2, is slated to perform for the Filipino audience starting tonight, October 21, at The Gallery in Greenbelt 5 at 6:30 p.m.

"I know that the Filipinos have an incredible tradition of singing... and we're all about singing," says the group's baritone from Sussex, Jules Knight.

The other members of the United Kingdom-based singing act are the equally gorgeous Stephen Bowman, Humphrey Beryney, and Ollie Baines.

Blake catapulted to fame in Europe when they launched their debut album in 2007.

The eclectic mix of classical and pop singles through a harmony of strong vocals was well-received by its British audience. In no time, the self-titled album topped the UK Classical Album Chart and hit the 18th spot in the UK Pop Album Chart.

In 2008, Blake bagged the Album of the Year title in the esteemed Brit Award.

While the band is yet to gain its popularity in the local music scene, Jules, Stephen, Humphrey, and Ollie have earmarked Filipinos to be a music-loving people.

At the press conference held earlier today, October 21, at Dusit Thani Hotel in Makati, the group talked about being fan boys of the internationally-acclaimed Lea Salonga and also their plans of hitting the karaoke bars.

Says Jules, "Lea Salonga is a bit of a legend in the UK. She's a well-known, brilliant singer.

"We're all big fans of some of the musicals, in fact we'll be performing 'Bring Him Home' from Les Miserables tonight.

Meanwhile, Stephen, the bass baritone from Bath, asked in jest, "I'm actually very much looking forward to testing out the karaoke bars in Manila and in Cebu as well. Can anyone recommend a really good karaoke bar?"

FRIENDS OF ROYALTY. Blake is likewise known for their single "All of Me" which the band composed and sung for the wedding of Prince William and Catherine Middleton.

Beforehand, the group had been invited twice to perform before the royal family at the Buckingham Palace in London.

How exactly do they know the Duke and Duchess of Cambridge?

"It was sort of a twist of fate, really," narrates Jules.

"Ollie and I, in separate circumstances, met and knew both Will and Kate. I went to St. Andrew University with both of them and I lived next door to Will and I got to know him very well in the four years that I was there."

Both Jules and Prince William majored in History of Art in the said university.

"I'm one of the very lucky people who [was] in that friendship group and we witnessed the beginning of their relationship.

"They started out as great friends and it turned into an amazing, romantic story that we all know so well."

Ollie, the tenor from Wiltshire, adds that he and Kate had been childhood friends.

He says, "It was a long time ago. Kate is a brave girl to get into that busy life."

"We've been exceptionally privileged to perform for the royal family on a number of occasions at the Buckingham Palace in London," remarks Humphrey, the group's tenor from Norfolk.

CLASSIC-POP MASH UP. Blake cites Facebook as a defining component in the formation of the band.

While Jules and Ollie have been friends since they were seven years old, the other two members found their way to them through the social networking site.

Asked about their secret to reaching out to a worldwide audience that generally favors rock and pop over classical music, the band agrees that, "What we've always done is to take four voices and have them in four different harmonies. So, you have a very rich sound."

It's that strong four-part harmonic foundation that has been the defining element in their eclectic repertoire, ranging from Michael Buble to Adele, in a style reminiscent of the Bee Gees and the Beach Boys.

"[These days] people have a very eclectic taste in music," explains Jules.

He calls this generation the "iPod generation"—with people on constant shuffle mode, switching from classical music to pop.

"We're trying to encompass that. We try to cater to everyone's taste," says Jules.

PACMAN'S FANBOYS. Further asked about which international musical acts and artists they would still love to work with, the band stands united in picking out Pound for Pound Boxing Champion Manny Pacquiao.

"For some time now, we wanted Manny Pacquiao to be our fifth member. We're very much hoping that he might agree!"

Candidly, Jules suddenly turns to the cameras rolling and gives a shout out: "Manny, if you're watching, we'd love you to be the fifth member of Blake. We wanna do a song with you!"

Humphrey added that the band agreed on two things about The Pacman— that he has a great voice and the other, a great left hook!