Janice de Belen on ex-husband John Estrada: "I do not feel the need to work with him." 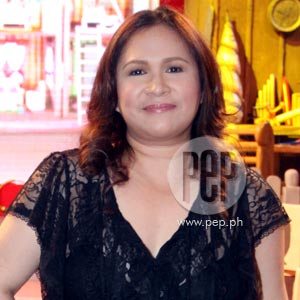 "I don't want burden on another person. I don't like that burden to be on his wife. I do not want to ever make her feel uncomfortable even if it's just we are working together," explains Janice de Belen about choosing not to work with ex-husband John Estrada, who is now married to Priscilla Meirelles.

It's been a decade since Janice de Belen was last seen on ABS-CBN.

Now, she's returning to the Kapamilya network with the role of Gerald Anderson's mother in the upcoming primetime series titled "Budoy."

Her last project on ABS-CBN was Saan Ka Man Naroroon (2000). After that, most of her TV projects were on GMA-7, except for her cooking show Spoon, which is still airing on Net 25.

The actress admitted that she was excited when told that she would be working again with ABS-CBN.

"In other words, pakitang gilas ka ulit," Janice told PEP.ph (Philippine Entertainment Portal) and other media on the set of Budoy yesterday, October 5.

She also related how happy she is about being able to work with different networks.

"Mahirap din akong maging exclusive kasi I have Spoon, which is on another network [Net 25].

"Kasi, while I'm working here, I'll be working with them.

"The only station I will be working with is Net 25."

Does this also mean that she'll be more visible on the Kapamilya network?

"All I know is I'm enjoying. I'm having a good time now.

"Should there come a time that I should be working with another channel, feeling ko dapat gano'n lang.

"Maganda rin that you work here, you get to work with different people.

"You work in another place, and you get to work with different people again."

WORKING WITH HER EX-HUBBY. Since Janice is back on ABS-CBN, some are curious to know if there's a chance that she and ex-husband John Estrada will work together in a TV series.

Janice sighed, then answered, "Alam mo, tama nang ganito na lang. I do not feel the need to work with him.

"At saka, I feel na it's better if we don't work together."

Before anyone could give a different meaning to her answer, Janice clarified her thoughts right away.

"My take on that is, should we work together again... Hindi naman kami best friends. You need to have a good working relationship."

The TV host-actress also said she wants to stay away from intrigues.

"Kasi, kapag nag-work kami together, there's going to be so much hype, so much hope lang."

Janice also doesn't want to cause any problems for John's wife, Priscilla Meirelles.

"I don't want burden on another person," she explained.

"I don't like that burden to be on his wife.

"I do not want to ever make her feel uncomfortable, even if it's just we are working together.

Although Janice does not feel a need to be working with John, she made clear that they're civil to each other.

She added, "You know, whatever needs to be talked about, whatever...

"Noong maliliit pa ang mga anak ko, if there's something that needs to be talked about, we'll talk about it.

"Other than that, they can already tell their father what they want or what they need. Malalaki na sila, e."

In the end, Janice reiterated that there should never be an issue between her and John.

"There's no need for the hype. Okay na.