Dawn Zulueta: "I thought all men are basically the same." 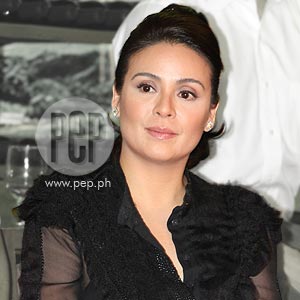 "I'm glad kasi he's never given me any reason doubt his fidelity. I think I am so blessed kasi I thought wala nang ganyang lalaki sa mundo. I thought all men are basically the same," Dawn Zulueta said about her husband, Davao Representative Anton Lagdameo.

At the press conference of ABS−CBN's Walang Hanggan, the entertainment media showed great curiousity about why the much talked−about relationship of its lead actors, Richard Gomez and Dawn Zulueta, did not last.

After the presscon, PEP.ph (Philippine Entertainment Portal) and other media were able to ask Dawn if Richard's statement was true.

"So, I had to refresh his memory.

While this may have been a serious issue before, Dawn and Richard now talk and laugh about it casually.

The multi-awarded actress agreed with her former reel- and real-life partner that they're one of the few couples able to work together despite their romantic relationship coming to an end.

"We treasure the kind of working relationship that we have, pinangangalagaan namin 'yon.

Dawn was asked how long it took her to move on from her breakup with Richard, and she answered, "Siguro isang taon din or maybe less."

For her, that was a long period of feeling bad. She even jested, "Siya nga nakapag-move on agad!"

UNDERSTANDING SPOUSES. But everything is in the past already. Now, both Dawn and Richard are happy with their own families.

Dawn also said, "I'm happy for him because he married such a lovely wife.

"Lucy has such confidence in her bearing. 'She allows you to work with your ex-girlfriend!'

In fact, according to Dawn, he did not mind her working with Richard again in Walang Hanggan.

"I said, 'No, ito 'yong project at ito ang makakasama ko.' He appreciated it."

Dawn also mentioned that her husband proved to her that there are still men who remain faithful to their partners.

"I'm glad kasi he's never given me any reason to doubt his fidelity.

"I think I am so blessed kasi I thought wala nang ganyang lalaki sa mundo.

"I thought all men are basically the same."