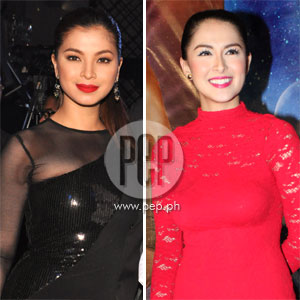 Avid followers of Marian Rivera and Angel Locsin gave different reactions when PEP.ph (Philippine Entertainment Portal) reported recently that the two stars might do a movie together.

Angel and Marian together in one movie was actually the idea of Regal Entertainment matriarch, Lily Monteverde. (CLICK HERE to read related article)

This was revealed by Marian's manager, Popoy Caritativo, when PEP tried to confirm the report in a text message.

He said, "Marian and I are open to [it], pero wala pa talagang napag-uusapan."

Angel's manager Ethel Ramos said she has not spoken with Malou Santos, president of Star Cinema. Angel is currently under contract with Star Cinema, the film outfit of ABS-CBN.

THE PULSE. Although the said project was just a proposal, many PEPsters were eager to see the two female stars together in a movie.

Although Angel and Marian belong to different networks, this idea might work, especially since similar collaborations between and among film productions have been successful.

Kapamilya actress KC Concepcion and Kapuso actor Richard Gutierrez were together in When I Met U (2009, Star Cinema and Regal Films), and more recently, Dingdong Dantes and Kris Aquino worked on Segunda Mano (2011, Star Cinema, Agosto Dos, and MJM Productions).

On the other hand, only 23.81 percent of PEPsters were against the two actresses doing a movie together and voted, "Ayoko! 'Di ko type!"

The remaining 21.25 percent did not seem to care and chose, "Dedma."

The feud between die-hard Angel and Marians fans started when former Kapuso star Angel transfered to ABS-CBN in 2007.

That same year, Marian was declared "GMA-7's Next Big Star."

Fan animosity intensified when Angel was launched as ABS-CBN'snew Darna.

The enmity between Marian fans and Angel fans continues to this day.

Meanwhile, the two actresses have no known conflicts.