Bea Alonzo says Zanjoe Marudo is "the perfect guy"; reveals plans to vacation together in Korea 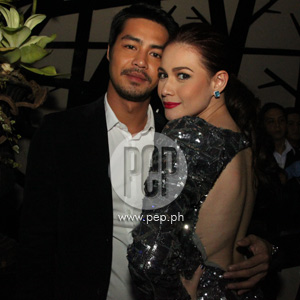 Bea Alonzo on rumored boyfriend Zanjoe Marudo: "He's the perfect guy. Anyone would be lucky [to have him]."

Friends and colleagues partied with Bea Alonzo last night, October 8, to celebrate two milestones in her life —her 24th birthday and her 10th anniversary in showbiz.

Dubbed BEHOLD, 10 Years of Brilliance, 24 Years of Wonder, the event took place at The Establishment at The Fort.

Wearing an all-white asymmetrical dress that showed off her toned legs, Bea made a grand entrance with rumored boyfriend Zanjoe Marudo by her side, who held her hand all the way to the stage.

At around 11 p.m., Bea changed into a sparkling dress revealing a sexy back. She agreed to be interviewed by select members of the press, including PEP.ph (Philippine Entertainment Portal).

"Gusto ko nang mag-birthday party every year kasi it doesn't hurt to celebrate every now and then."

Why did Bea agree to throw a big party this year?

"It's my 10th anniversary in showbiz this year and feeling ko, kailangan kong mag-give back to those people na naging part ng career ko.

What role did Zanjoe play in Bea's 24th birthday celebration?

What is Bea's wish for herself?

What is her dream role?

"My next project with Olive Lamasan," she said.

In a separate interview with PEP.ph, Sam Milby said he would be working with Bea Alonzo in a movie with Direk Olive.


The ABS-CBN actress also said she has been following the Cohen diet, and lost ten pounds.

What does Zanjoe think of Bea's slimmer figure?

Will they have an intimate celebration?

She said they would leave by mid-October and stay for four days.

GIFT FOR BEA. When asked if he had a gift for Bea, Zanjoe chose to keep mum, saying: "Mag-lo-loan ako. Mag-lo-loan ako sa bangko...baka pwedeng financing."

A reporter asked if his gift was a ring. Zanjoe suddenly knelt down on the floor as if to propose!

Bea just laughed off the gesture, so did Zanjoe.

Is October an important month for Zanjoe?

Zanjoe said he wants Bea to be his wife in the future.

"He's the perfect guy. Anyone would be lucky [to have him]," she said.