Richard Gutierrez wants to "reinvent" himself and "do more acting roles" 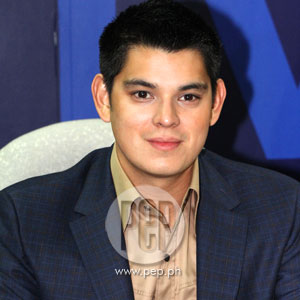 From being a forerunner in GMA-7's fantaseryes to hosting documentary and reality shows, Richard Gutierrez wants to do some serious acting this year.

He tells the media last January 25, "I want to go back to basics this 2012, and go back to acting and do ah...mga projects na I can showcase my acting capabilities...

"I want to challenge myself again and reinvent myself again, do more acting roles, and ah...more challenging characters."

When asked what specific role does he want to portray, he answered, "Andami, e..."

The Kapuso leading man continued, "Endless yung list ko pero ahm, it's a matter siguro of the right project at the right time so... "

POSSIBLE LEADING LADIES. One thing he's sure he wants to do: the movie with Sarah Geronimo.

"You know, she's a good actress, she's a great entertainer so, ah...I want to do a movie with her, hopefully happening soon.

"Pero ako naman...for me, I don't wanna rush things. Ah, ayokong ipilit...time will come, the right time will come for everything, so hopefully soon..."

Say he wants another project with KC Concepcion or he wants to be paired again with Anne Curtis, "puwede nang mapag-usapan."

The hiccup may probably be caused by the network contracts.

Richard said, "Mahirap kasi ngayon dahil yun nga, ah...may GMA and, of course, we know that Anne has been with ABS-CBN and KC is with ABS-CBN.

"So it's not an easy task also for us to work together, pero yun pa rin, posible siya."

What happened to his supposed project with Judy Anne Santos?

His answer: "I'm not sure pero hopefully matuloy din yung with Juday...

"She gave birth and, you know, she did a movie, yung sa Metro Manila Film Festival...

Aside from Sarah and KC, there's another actress he wants to work with again: Angel Locsin.

If a trade-in or tie-up is going to happen in the future, "You know a lot of fans want me and Angel to do another series or another movie. Yun yung mga parang dream na project ng mga fans sa atin," he stated.

We've been talking about his reel partners, how about the lady who's part of his real life?

"I'm married to Triathlon right now so I'm focused on that for 2012. I'll be joining the IronMan so kelangan ko talaga ng intense focus."

Lastly, how come he has become so secretive about his love life?

"I like things private...pero as of 2012 nga, parang for me, no more distractions. Just focus first."