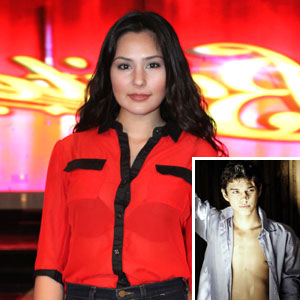 Gwen Zamora admits having a crush on Marvin Kiefer (inset), who—according to the 21-year-old actress—he looks like her favorite Hollywood actor Ashton Kutcher.

Gwen Zamora's next role is being a "fan girl."

She tells PEP.ph (Philippine Entertainment Portal) during the press conference of Biritera, "As in number one fan ni Dennis Trillo..."

She can relate with her character Iris because in real life, she's a "big fan" of Ashton Kutcher."

Between giggles, she remarks, "Since I was young talaga, Ashton yung number one, until now...until today.

Who among the celebrities is the Pinoy counterpart of Ashton?

"Wala akong type," she initially replies before dropping the name of "Marvin Kiefer."

Does Marvin know that he's your crush?

She says, "Oo, palagi ngang sinasabi ko sa kanya, 'I like you. You're my crush.' Pero tawa lang kami."

So there's no way she and Marvin will become more than friends?

Gwen and Mike Tan won the Model Star Award, while Marvin bagged the prize for best in traditional costume.

From crush, the topic shifted to leading man.

If given the chance and if she will have her way, the Kapuso newbie would pick Dennis Trillo as her leading man in her launching project.

"He seems very composed. Ano siya, e, very tahimik on set. Very focused...So that would be a nice person to work [with]," explains Gwen.

For now, she doesn't seem to be picky about roles, but her only request, "Sana walang magic-magic..."

In 2010, she played the role of Faye, the fairy wife of Vic Sotto in Si Agimat at Si Enteng Kabisote.

Smiling, she responds, "E, pero half of the movie, wala kaming magic."

Gwen pauses for a few seconds, and tries to answer our question, "What exactly is your dream role?"

She comments, "Ahm, actually that is a very good question, but I really don't know..."

Then she suddenly remembers, "Romantic comedy!"

She resumes, "I started as a comedian, and I think it's still there. As in kahit...ang hirap ihiwalay yung pagka-comedy ko, e....Kahit in person, mahahalata, lalo na sa Bubble Gang."

In her childlike voice, the 21-year-old Kapuso adds, "Or action, romantic action comedy!"