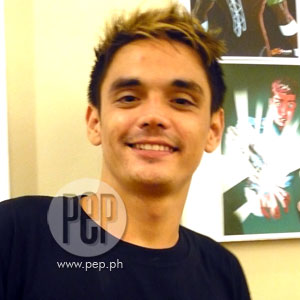 John Wayne Sace told PEP.ph (Philippine Entertainment Portal) that while doing Pinta*Kasi, he became good friends with his co-stars JM De Guzman (not in photo) and Alwyn Uytingco (not in photo). He said the two guys have been helping him "para ibangon ako patayo."

Pinta*Kasi was supposed to be his breakthrough role.

But more than two years since the film's shoot wrapped up, it was another actor, the then-struggling JM de Guzman who took center stage.

But he didn't seem comfortable being in front of reporters again. In fact, he left the interview area hastily after the question and answer portion.

After a few minutes, he obliged to our request for a one-on-one interview, where the question that greeted him was, "Ano bang nangyari sa iyo?"

The guy who used to make the ladies swoon because of his mysterious charm answered in a quite unsure tone, "Nagpahinga lang po. May mga inaayos..."

Jawe (his nickname) is still slim, but his physique is no longer as lean as before. Short spikes replaced his quite long hair, which now has blond streaks.

What's with the hairdo?

Six years ago, he was one of ABS-CBN's busiest stars—working with three regular television projects (Sa Piling Mo, Your Love, and Love Spell) almost at the same time.

It was also around this year when reports about his being pasaway began to surface.

He added that a "reformed" Jawe wen to the shoot of this film produced by governor Imee Marcos.

CAREER PLANS. The pasaway image took its toll on his career. His one and only project last year was Guns and Roses, where he played the young Robin Padilla.

Does he have plans of reviving his acting career?

Transferring to TV5 has crossed his mind.

And given the choice, the 23-year-old actor-dancer wants to give "comedy shows" a try.

In the meantime, he's going to be known as DJ in Pinta*Kasi, which will be shown in SM Cinemas starting today, February 8.

Lastly, are his pasaway days over?