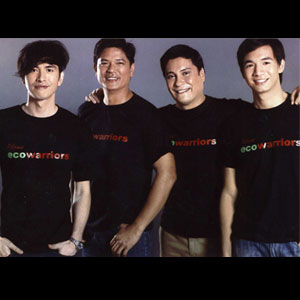 Pilipinas Ecowarriors will have Miguel Zubiri (second from right) and Chris Tiu (right) as frontliners. The other two ambassadors are Rico Blanco, who was not present during the press launch, and Doc Nielsen Donato, who had to leave early to catch his flight to Palawan. The campaign's major difference from the already-existing environmental organizations such as Greenpeace is its extensive use of social media, which will push the people's ac

Using social media as a channel to address environmental problems is the idea behind Miguel Zubiri's new campaign, Pilipinas Ecowarriors.

Together with TV host-athlete Chris Tiu, singer-artist Rico Blanco, and Born to be Wild host-veterinarian Doc Nielsen Donato, they were launched as the newest environmental ambassadors on February 15 at the Imperial Palace Suites in Quezon City.

The Ecowarriors will then coordinate with the corresponding DENR regional offices and other concerned bodies, such as the military or the police—as the situation would require—to address these concerns.

At the same time, they will also organize proactive ways of helping the environment through tree-planting activities and clean-up drives.

Migz is eyeing 1,000,000 volunteers, who can help his team in telling the Filipinos that environmental problems can hinder economic development.

He pointed out how the environment has not been a priority of many Filipinos who are more concerned about their economic well-being without realizing that our main source of livelihood has to do with our environment.

Migz continued, "This is not only in the forest but this is also in cities. And I'm happy because Chris is actually a barangay kagawad of Barangay Urdaneta in Makati City.

"As a man of the city, he will be the one in charge of launching the campaign for clean and green Metro Manila with the volunteers."

CHRIS'S COMMITMENT. Aside from being a barangay kagawad, Chris is also involved in other socio-civic organizations: World Vision, Habitat for Humanity, and Go Negosyo.

When Migz brought up the idea, Chris realized that his advocacies did not include environment so he readily joined.

Last year, Chris organized two charity works with his family, friends and fans. With this new advocacy, "I'm thinking of doing it at our concert na."

Chris, in fact, participated in a charity game just last month for the victims of tropical storm Sendong in Iligan City and Cagayan de Oro.

"We'll also be doing campus tours. So we'll be going around schools and we'll be playing a video and be speaking to the students to encourage them to join the movement."

CONCERT. To officially launch Pilipinas Ecowarriors, a free concert will be held on March 41 at the Quezon Memorial Circle.

Leading the pack of performers will be Rico Blanco, with Chris possibly doing a special piano performance.