Delamar Arias talks about struggles of a single parent 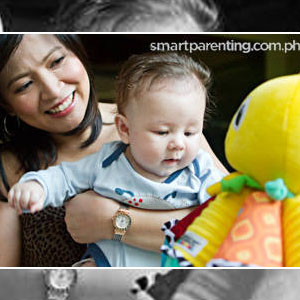 Delamar Arias: "Parenting is so tricky. You could be a single mom and do a spectacular job or you could be married and do the most horrible job ever."

Being married and giving birth to a child are considered milestones in every woman's life.

These two—according to the social norm—should happen chronologically: after marriage comes pregnancy.

The opposite happened to radio disc jock Delamar Arias, who got pregnant with his son Cooper Matteo without the sacrament of marriage.

For the first time, the co-host of Chico Garcia in RX 93.1's The Morning Rush, talked about her "unexpected pregnancy" in an exclusive interview with Stephanie F. Esguerra of smartparenting.com.ph.

Though single mothers abound, Delamar has been idealistic about her views on relationships and marriages.

"I would only want to have a child if it's the product of a good, stable relationship," she related. "I always thought since the world is so harsh, you might as well have that nest of a good family to be born into."

She's resolute about her belief that a kid should grow with a dad and a mom by his/ her side.

The radio personality continued, "I didn't want the burden of rearing that child na ako lang kasifeeling ko a child needs, at least, both a mom and a dad."

But at the age of 27, she was diagnosed with "ovarian cysts, endometrial polyps, and have undergone an operation," which led her to thinking that her chances of conceiving would be smaller.

UNEXPECTED PREGNANCY. But as fate would have it, she got pregnant at the age of 35. And she was not even married to her musician boyfriend Tyler Ashby.

"I didn't expect it, and to be honest, I didn't want it, because of the situation," confessed the 38-year-old disc jock.

"There were just fears because of the situation. But the pregnancy itself? I couldn't be happier kasi I didn't expect it and I didn't even, to be honest, want it.

"I have an idea of family and how kids should be brought in this world, and obviously, I didn't follow it, so the reservation was coming from there."

It didn't take long before she realized that having Cooper, the baby's name, is a blessing.

"There was a dream that was shattered, kasione thing you said you wouldn't do happened to you.

"But then when I thought about it, you weren't supposed to get pregnant ever. But then here you are, against all odds, age, your medical condition, everything.

"Apart from the shock of it, there was fear obviously, but after a while, 'Hey, I'll be a mom!'

"When I got used to the idea of the pregnancy, then I was quite happy about it.

ON MARRIAGE. Though already pregnant with Tyler's baby, she didn't impose the idea of getting married for the baby's sake.

"What I do for my child is different from what I do for me," she explained. "The only question is do you get married because you have a child? Is that enough? Is that a good idea?

"What if it just breaks apart later on because it's not the [best] reason? We're just really careful about that, and there are so many issues around it anyway.

"I just don't want to get married because I was pregnant."

In the end, she chose what she thinks would be best for her baby.

"The marriage is about me and the dad, and though it has implications on Cooper, this is primarily between he and I.

"So if we're doing it just for him and it falls apart sometime in the future, there's a world that will be broken and he will have a hard time coping with that.

"Kaysa 'yong he comes into a situation where I'm there, his dad's there, and we're getting along.

"So that's what we decided."

SUPPORT AND DISAPPOINTMENT. After settling her marriage issues with Tyler, it was time for Delamar to face her family, friends, colleagues, and avid radio listeners.

She first opened up with her friend who used to be a DJ.

Then, after collecting enough courage, she finally told her family.

It was hard for her father to accept the news, but her siblings were happy about it and supported her along the way.

On the third month of her pregnancy, she decided to announce her condition on air.

She said, "It's impossible not to say because people come here. We're on Facebook. I just need to be truthful every step of the way."

DURING THE PREGNANCY. She felt relieved after informing the people closes to her heart.

That's when she started being happy about her situation.

"I love being pregnant!" she exclaimed. "Hassle-free, hitch-free, it was great! It doesn't mean that bad things weren't happening around you, but for some reason, you're just happy.

"I was always in a good mood. It was generally a happy pregnancy. Having the baby itself was the happiest thing for me."

Delamar also noticed that "everything tastes good" to her.

She added, "I was eating the best when I was pregnant. Masarap matulog, masarap kumain.

"I opened a bag of Cheetos and it was like heaven opened up. Grabe ang sarap!

THE LABOR. October 11, 2011 arrived. It was the day Delamar gave birth to Cooper Matteo, whose name means "gift of God."

She had a normal delivery that lasted for 11 hours. Yet, she sensed that something was wrong with the baby's heartbeat.

Subsequently, her doctor noticed it as well, and found out that it had a "cord coil, had swallowed his feces, and developed pneumonia."

The baby was immediately rushed to the Neonatal Intensive Care Unit, where Cooper stayed for a week.

Fast forward to today, he is now a four-month-old healthy baby boy.

BEING A MOM. Delamar enjoys being a single parent who gets help and support from her boyfriend.

Sometimes, she would get this "you're a role model" remark from people.

And she'd always say, "I'm not...I'm just a girl who has a job on the radio. You can use me as your cautionary tale for your kids. And I hate that idea. I'm not saying this is okay.

"More than anybody, I'm broken-hearted about the situation. But I'm going to make the most out of it."

Can she say she's good at what she's doing?

Her reply: "I was just really winging it. How many single women have been out there and actually did a great job than women who were married? A lot! You can't ever say.

"Parenting is so tricky. You could be a single mom and do a spectacular job or you could be married and do the most horrible job ever.

"I realized that my happiness, actually, nakakabit sa kanya, e. If I'm okay, and the dad and I are okay, whether we're married or not, he's going to be okay."

Lastly, she gives an advice to all single parents out there: "You're a parent. Your job really is to accept the child with any fact of his life, whether he's adopted, whether he's being raised by a single mom or a single dad, or you're poor.

"Your job is to equip the child na, 'A, ito ang buhay ko. Ito 'yong facts ng buhay ko, e. how do I live my life in a happy way and accept all of it and be okay?'

"If you make him feel like he's less [of a person because] you don't have a husband, that's exactly what he's going to think.

"But if you tell him 'You know what, I didn't marry your dad. But you're in no way any less than your classmates,' then that's what he's going to believe."