A Rush of Endorphins: The Best of Chico and Delamar's "The Morning Rush" Top 10 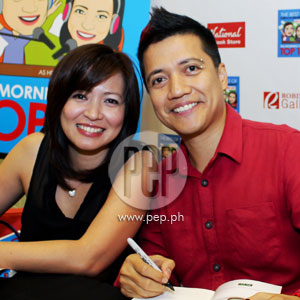 Chico Garcia and Delamar Arias of RX 93.1's daily radio show, "The Morning Rush," put together thirteen years's worth of material from their Top 10 lists. The Best of Chico and Delamar's The Morning Rush Top 10 (produced in collaboration with Summit Books) is a certified bestseller that's also funny.

If you are not familiar with this radio duo, their now bestselling compilation of the most laugh-out-loud, tummy-and-jaw-aching Top Ten lists (e.g. Top 10 Misheard Lyrics, Top 10 Celebrity Jokes, Top 10 Signs You're a Poser, Top 10 Taray Quotes, Top 10 Ways to Complete the Statement: "Ang Tunay na Lalaki...") attests to their infectious hilarity and wit.

Chico Garcia and Delamar Arias, popular hosts of RX 93.1's "The Morning Rush," seal their influence on media and their staying power through their best-selling book, The Best of Chico and Delamar's The Morning Rush Top 10.

The show started airing on RX since 1996 and introduced "The Daily Top 10" portion which appealed to and drew a legion of listeners, also called the Rushers. These listeners's weekday mornings were delightful the past years thanks to Chico and Delamar's insanely entertaining show.

The highlight, of course, of The Morning Rush has always been "The Daily Top 10" of any given topic. They include The Top 10 Signs That He or She Isn't Into You, Funny Gay Quotes, Advice for the Loveless, Reasons Why Cars are Better than Girls, Things to Say to Someone Who's Flirting with Your Partner, Grandparent Moments, Office Bloopers, Misheard Lyrics, and so on.

The book contains a hundred lists from thirteen years's worth of material.

Chico and Delamar had always wanted to compile their material, initially as a memento or souvenir for their Rushers. They had qualms, thinking their Top Ten lists would not be as effective in print as it is on air.

Chico says they were prodded by people to start working on it. "We have been very excited about this project. Actually for years... It was a nice idea but we didn't know how to go about it."

Adds Delamar, also Del to their listeners, "We didn't know when or how. We have been doing the Top Ten for 13 years already!

"[That's] 13 years of material just waiting to be compiled in a book.

"And so when Summit [Media] called Chico and said, 'We have a proposal for you,' we sat with them at Starbucks right beside our building and we were like, 'Oh my gosh, this is it! It's going to come true!'" says Delamar.

A difficult task was at hand the moment Chico and Delamar agreed to come up with their 100 Top 10.

"We suddenly realized, you know this is hard because imagine how many Top 10s we've had in 13 years!" Chico says.

"Good thing we actually kept them because usually, I don't think people make lists of, you know, what they do on radio, so.

"Good thing I kept notebooks, I would write them down... [pero] hindi ko na mabasa... I tried reading them [but] I can't understand them!

"But the ones that I sent to myself by e-mail, those were the ones we were able to [use]."

Choosing timeless topics also proved to be a challenge.

Del elaborates, "Of course, there were topics that were funny at that time... like the Mommy Dionisia jokes.

"When we did that on air they were funny, but a couple of years down the line, they didn't have the same appeal anymore.

"We chose topics that would still be funny even if we did them a year and a half ago, or two years ago. If they made us laugh still, then they made it to the book."

The lists that made it to the book were material gathered from 2008 to 2010, according to Chico.

What about the rest of the materials? Is there a Volume 2, perhaps?

Both Chico and Del are open to the possibility since they come up with lists on a daily basis.

Del says, "Maybe Book 2 will have a different flavor!"

"Our listeners have evolved with us. So, I guess, even the quality of the entries, will be different," puts in Chico.

NOT ALL THEIR DOING

Brainstorming and coming up with ideas for the daily Top 10 proved to be a tough task.

Chico explains how tricky it could get, "Kami nag-iisip ng topic on a daily basis and sa totoo lang, it's a challenge kasi sometimes a topic sounds good in theory but when you execute it, nobody wants to join.

"And then sometimes there's a topic na parang, 'Okay wala na, e, so ito na lang!' Tapos it becomes one of the best topics we've ever had.

The daily Top 10 proved to be appealing to listeners, an addiction for some.

"Because we started doing it regularly, our listeners started to suggest [topics] themselves. And now... siguro 70 percent of what we use are actually from our listeners... so it's really a community effort," says Chico.

"It's the hosts and the listeners, it's a symbiotic relationship. If they send the entries and we don't do them justice, e 'di wala rin.

"It doesn't matter how good we are if the entries aren't funny or if they're not interesting. Wala rin. It's a very nice relationship between us and the people who listen to us.

"It really becomes a community and that's what's really nice about it.

SECRET TO THEIR LONGEVITY

What is the secret to the show's staying power?

"It's fun," Chico answers. "It's as simple as that. Kasi it's... 'di ba, merong trabahong nakakatanda?

"... We always deal with fun people and our listeners are incredible. They always make us laugh. Actually, before pa namin siya i-air, napapatawa na nila kami. They never fail to surprise us."

Doing the show has affected even their personal lives. Chico admits it's a pleasure to do "The Morning Rush."

"Sa totoo lang... sometimes during the rough spots in our personal life, doing the show helped us.

"We laugh for like, a couple of hours. We really genuinely laugh! They make us laugh—even if we're depressed, or we're sad, or whatever—for the four hours that we're doing the show," Chico says.

"Nothing can go wrong for four hours and all we really do is have fun. So we were thinking, 'Wow, what a job, right?'

"So I guess that's the ingredient, the main ingredient is... not to have fun all the time, but [to keep it] engaging.

"[If] it's engaging, it elicits a genuine reaction from people."