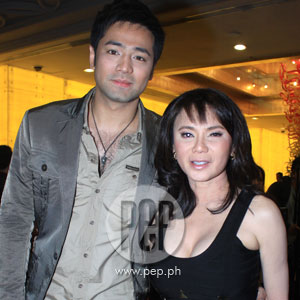 Prior to this, the cosmetic surgeon posted an intriguing tweet about allowing her former fiancé to "date" former singer-actress Nancy Castiglione.

Hayden was quick to defend, through a series of Twitter posts, that he and his girlfriend were only having a "misunderstanding" and that there's "NO infidelity issue" involved.

The day Dra. Vicki arrived, Hayden posted a letter, which was written by yoga instructor Al Galang supposedly for the cosmetic surgeon. He dubbed this a "real proof of infidelity."

He deleted it a few minutes later, and apologized, "In the height of my anger, I tweeted those things and now I regret it."

He also related on Twitter that he and his eight-month fiancé had already talked about their issues. Hayden stressed, "Vicki NEVER cheated on me."

THE PULSE. Some PEPsters were not too pleased about this very public lovers' quarrel on Twitter.

PEPster iwwang2 even said, "they are old enough to know what they are doing. let them manage their own love and personal affair."

But this doesn't mean the people have grown tired of news about split.

What they can't tolerate are instances of "trigger-tweeting," especially when the parties involved are in a very emotional stage.

Hayden eventually decided to quit Twitter, and also hinted at not pursuing his plans to go back to showbiz anymore.

One of his last tweets read: "And so, finally and officially, I am quitting this twitter account and abandoning my previous plan of going back to THAT world."

And people had hoped that he meant what he said.

PEPster kazumi_yumi also had a similar opinion: "why oh why can't these two take their lover's spat out of the public eye, it's entertaining to us and yet gross at the same time, so sad for both of them, they don't know how to act like adults and are an embarrasement to their loved ones, grow up, both of you!"

With these reminders, the readers are hoping that from hereon, the issue between Dr. Belo and Hayden will be dealt with privately—whether they reconcile or completely put an end to their relationship.