Gab Valenciano has a change of heart about getting married: "I would rather be ready for a wedding or a marriage or a wife than get ready while I have a wife." 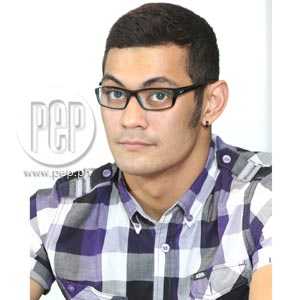 Gab Valenciano says about his former girlfriends, "I still have that love and compassion for them kasi may pinagsamahan kami."

The son of popular music artist Gary Valenciano seemed reluctant to elaborate on the topic. He simply said, "I don't wanna comment on that because that's not entirely true."

He added that he's well aware of the tag but is unaffected by it, "Yes, I do have a reputation, but people will never know naman what happens in a relationship."

Unlike some celebrities, Gab is not the type to keep mum about the ladies being linked to him.

"I'm a very vocal guy because I'm proud. I can never keep it in unless kailangan talaga.

"I'm the type of guy na when I love someone, when I care about someone I will let the whole world know," explained the ASAP 2012 dancer.

But when things fall apart, Gab said that he's not the type who would try to fix something he already deems impossible.

"I'm just the type of guy na I will take in whatever I have to take in."

"HAPPIER NOW." But he's glad that his former girlfriends "are in happier places now."

"With [Isabel Oli], I hope she finds that joy and happiness—not just in a guy but in something and in God. I'm sure that happiness will come."

Though things didn't work out with his ex-girlfriends, he has no regrets.

"I know for a fact that we were in each other's lives for a reason.

"We learn from it. We'll be better the next time.

"With Nikki, Rachel, and [Isabel], I love them, really, when we're together.

"Until today, I still have that love and compassion for them kasi may pinagsamahan kami.

STILL FRIENDS WITH EXES? And each time his relationship ends, he makes an effort to retain the friendship.

One lesson he learned from his father: "What my dad always tells me, it's always better to lose the girl but it's never good to lose a friend.

"Kaya nga it breaks my heart when I see them come out on TV and I see them how they are, you wish you did things differently.

"But that's the path that we chose, and this is the path we are in now. I guess we have to live with it."

NO PLANS OF SETTLING DOWN. Meanwhile, Gab seemed to have changed his mindset now about getting married.

The 23-year-old performer used to say that he's ready to settle down, but that changed after he decided to focus on his career.

He elaborated, "I would rather be ready for a wedding or a marriage or a wife than get ready while I have a wife.