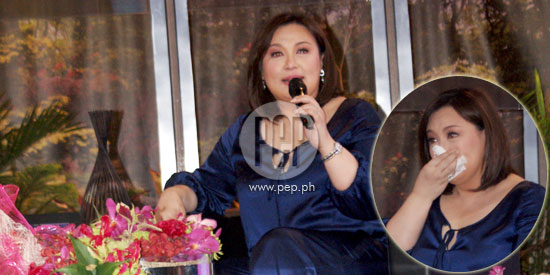 Despite her stature as the Megastar, Sharon Cuneta still has the right to get mad, cry, and feel bad.

Her eyes welled up with tears at the press launch of her new show on TV5, as she talked about her still-unresolved rift with her aunt Helen Gamboa, the sister of her Mommy Elaine.

It’s been more than a month since she said, "Yes, politics does divide families, like when my uncle says something bad about Kiko, you don't understand why..."

To which, Helen retorted: “Sumasama ang loob ko. I feel that it is not right na ang pamangkin ko ay masyadong matayog. I could feel that she's so unreachable. Hindi ko na siya maabot…”

But reconciliation seems nowhere near the horizon.

Her only line to Senator Tito Sotto’s family is Ciara.

But after “washing their dirty linen in public,” she’s now hoping the feud will finally come to an end.

“Yung pamilyang Sotto, I miss them so much…”

And in her own little way, she has been making attempts to “reach out.”

Whenever Sharon has a comment on her Tita’s portrayal in Walang Hanggan, she would text Richard Gomez—who’s also part of the TV series—and ask him, “Ipabasa mo [kay Tita].”

Politics also caused her falling out with Susan Roces, the wife of the late Fernando Poe, Jr., who ran for the country's highest office in 2004.

Before the latter’s death, it was a good thing she had a heart-to-heart with him, explaining why she was not able to support his bid for the presidency.

To date, she and Susan are not on speaking terms.

But she has expressed her desire to make peace.

Going back to her being the wife of Senator Francis Pangilinan, she remarked, “Kaya ang hirap ng sitwasyon ko, e. Napakahirap talaga.”

TWITTER BASHERS. Her tone turned sardonic when the issue of the nasty tweets was brought up.

“Parang bastusan, e,” she said. “There were some tweets that were very hard to swallow. In fact, may mga salita dun—both English and Tagalog—na all my life, I’m 46 years old, never ko pang narinig.”

The Megastar apologized twice to those who got offended.

She added, “You’ve never seen this in three decades, pero may temper ako.

But she recently learned how to deal with these “younger people." Ignore!

MOVIE WITH GABBY CONCEPCION. Meanwhile, she admitted to feeling bad about this showbiz website, where she read about being unfit to be a leading lady.

Her reunion movie with Gabby Concepcion was shelved, but it will definitely push through, Sharon said.

When asked why the shooting didn’t materialize last month, she cited Gabby’s deal with Viva’s big boss Vic Del Rosario as one of “ang daming factors.”

The second factor: “Ginbee, his wife, is giving birth to their second child.”

It will feature “stories ng regular people na nakakabilib…” and “anything good!”

And she hopes “to inspire, to encourage, to entertain, and make people laugh.”

The pilot episode will be aired on May 7, and the time slot will most likely be in the afternoon.

Again, her one-billion-peso talent fee was brought up.

And again, she underscored that her transfer from ABS-CBN to TV5 is “not about money.”

“So it’s not about the one-billion-[peso] contract…

She felt flattered by the remark made by Manny Pangilinan, the network’s chairman.

Going back to her career move, she emphasized that it was prompted by “creative freedom” and “a little respect.”

She added, “I think after what I’ve built for over three decades, I wanted a show that I felt, after all my hard work, I deserve it.”

But Kapamilya fans, don’t get her wrong…

Sharon is obviously happy with her new home, but “I’ll always be grateful to ABS-CBN.”