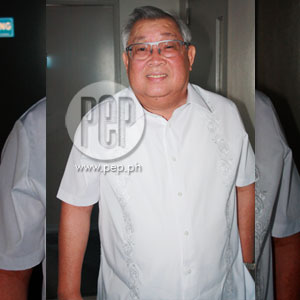 GMA Network CEO and Chairman Atty. Felipe Gozon says this about the supposed P500-billion offer to buy GMA-7: "Out of this world naman yun...That is a very wild rumor."

GMA Network Chairman & CEO Atty. Felipe Gozon led the network's executives who met with the media earlier today, January 5, to discuss the new Kapuso shows scheduled for launching in the first quarter of 2012.

He pointed out that all the programs are all-original shows.

"We are veering away from fantasy because we have discovered na marunong rin naman pala kami ng drama," Atty. Gozon said in his usual forthright style.

This time, the Kapuso boss was saying, "We thought of changing the program grid."

Indeed, three shows that do not have fantasy themes will premiere on GMA Telebabad:

Biritera (to air starting February 6) stars Dennis Trillo, Glaiza de Castro, Angelika dela Cruz, and a new young singer who has yet to be chosen from short-listed auditionees;

For the afternoon slot, four programs will be launched by GMA-7, also in the first quarter of 2012.

"We think we are in the best position this 2012 to get the better part of the advertising budget."

Asked why the decline in GMA Network's net income in 2011, Atty. Gozon said:

"Ang political ads namin for 2010 were more than P2 billion.

"Nag-increase kami ng regular advertising revenues, but if you consider the P2 billion, we had a shortfall of about P1 billion.

GMA-7 FOR SALE? In December 2011, social networking sites were abuzz with talk that Manny V. Pangilinan (MVP) had offered to buy GMA-7 for "P500 billion."

MVP bought TV5 in 2010, and his reported interest in GMA-7 has been seen as another effort to strengthen his television reach.

To dispel the talk, GMA Network announced last December 27: "There is no truth to the rumor going around in social media sites and the internet that Mr. Manny Pangilinan has bought GMA Network. In fact, there is even no negotiation going on between GMA and Mr. Pangilinan regarding the latter's acquisition of GMA-7."

Atty. Ray Espinosa, TV5 President and CEO, also denied the rumor, according to InterAksyon.com, the online news portal of TV5.

Earlier today, Atty. Gozon addressed the issue of the supposed sale of GMA-7.

He later added, "Out of this world naman yun... That is a very wild rumor."

PEP sources, however, insist that an offer has been made, but agree that "P500 billion" is a stratospheric number.

The actual offer, according to our sources, is also in the billions of pesos but way below that figure.

Our sources add that the three families owning the majority stock of the Kapuso network—the Duavits, Jimenezes, and Gozons—are not united in the decision to accept MVP's offer.

MVP himself has not been heard to confirm or deny that he has put an offer on the table.