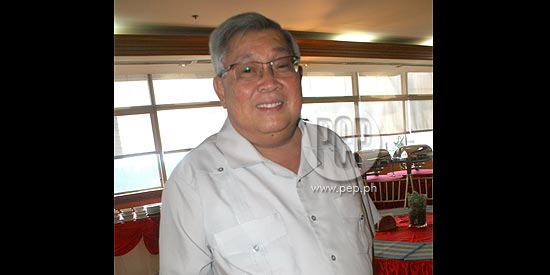 “However, sinabi ko naman being a realistic practical person that if we are offered a price that we think is right and we cannot refuse, e, sino ba naman ang hindi magbebenta kung kursunada mo yung price?" says Atty. Gozon when asked about the possibility of GMA-7-TV5 buyout.

THE TRUTH? “There are really many companies that are interested in acquiring GMA-7,” umpisa ni Atty. Gozon.

“One of them is the company controlled by Pangilinan… MVP.

“If you will recall, in 2002 I think, if I’m not mistaken, we actually signed a Memorandum of Agreement selling GMA to MediaQuest."

Aniya, “I will not mention anymore the amount but it’s a fraction of what we think the company is now worth.

"For reasons beyond the control of Many Pangilinan, the transaction did not push through.

"So it’s attributable to their side and not to our side.

“And I understood the predicament so I didn’t create too much trouble or fuzz about that and allow them to back out of the signed Memorandum of Agreement.

“And as I said, the price of GMA naman in the meantime kept on rising.

“From the ridiculous 500 billion [pesos] to which I jokingly responded that if it’s 100 billion, I will sign with my eyes closed. Et cetera, et cetera.

“But that was meant all to be a joke because I thought that 500 billion amount, which did not come from us, was a big joke."

“There was talk about this acquiring which have been going even before that.”

Mula raw kay kay MVP, ayon kay Atty. Gozon, “He told the group that to support also GMA-7… and I can understand that Dish [satellite broadcaster] is the competitor of DirectTV.

“Dish does not carry TFC [The Filipino Channel of ABS-CBN]. But it carries in a bundle TV5 and GMA-7.

“So maybe the context of his statement… to support also Channel 7 has something to do with Dish carrying TV5.

“I can see the point because Channel 7 is really more popular than TV5 even abroad.

"So maybe he wanted to ride on the coattails of GMA-7 in the U.S.

“That was a grand launch of TV5 in the U.S. And so he said they never mentioned anything about merger, or November or anything of sort.”

Ngunit diin niya, “There is no definitive agreement reached between us. I’m not closing the door."

MERGER IN NOVEMBER? "One of these days he might strike the right price,” nangingiti uling pahayag ng Kapuso chairman.

“I don’t want to tell you because he might know and then it might be less than what he’s willing to offer."

“Even Willie [Revillame] was already quoted to say, ‘We will announce something in November,' according to that report.

“But you already heard it through the horse’s mouth and the horse is Manny Pangilinan. And he said he never mentioned anything about November.

“No such thing. That one I can say because if I didn’t know it nobody else would know.”

“'Pag gusto nilang bilhin, it’s because we are extremely profitable.

"And if you read my report to our stockholders, I compared our performance in 2011 and with ABS, and it’s really a very big disparity, financially speaking, between us and ABS.

“And if I were not here, I would also like to acquire GMA.

“So the question is, why are we selling?

“However, sinabi ko naman being a realistic practical person that if we are offered a price that we think is right and we cannot refuse, e, sino ba naman ang hindi magbebenta kung kursunada mo yung price?

“I’m just answering the big ‘if.' Kung saka-sakali, pero wala pang… There is no agreement yet.

“There is no agreement.

"I’m not saying that the discussion will result in agreement.

“As I’ve said, we have been discussing since… we didn’t push through with the 2002 agreement.

“Napakahirap talaga i-describe yung situation, e. But that’s the best I can describe it for you.

“If I were the manager of TV5, I will not only think twice before replacing the people here.

"But Channel 2 will be a good second unlike Channel 7 before, very poor second, pero may competition no’n, right?"