Are Sam Pinto and professional surfer Luke Landrigan an item? 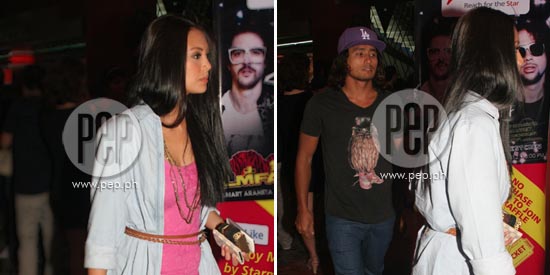 (Left) Sam Pinto arrived at the VIP entrance of the Smart-Araneta Coliseum to watch the LMFAO Sorry For Party Rockin’ concert last night, April 11. (Right) She was closely followed by her rumored new boyfriend Luke Landrigan.

Last night, April 11, Kapuso actress Sam Pinto was spotted hanging out with a mystery guy at the concert of interational music group LMFAO at the Smart-Araneta Coliseum in Cubao, Quezon City.

They arrived together a little after 7:30 p.m. at the venue’s VIP entrance.

Immediately, media photographers and fans spotted the 2011 FHM Philippines Sexiest Woman with her handsome date; but when asked for a photo op, they politely refused and walked nonchalantly past the crowd.

As PEP.ph (Philippine Entertainment Portal) did our research, we found out that Sam’s mystery man was Luke Landrigan—a Fil-Australian professional surfer and model.

You might recognize him as an endorser of a canned meat brand or if you’re into water sports, then you might know him as the head of the San Juan Billabong Surf School in La Union.

Apparently, this is not the first time that the two were seen together publicly.

On November 30, 2011, Sam and Luke were also spotted at the Smart-Araneta Coliseum enjoying the concert of international hip-hop/R&B artist Pitbull.

In a February 8 interview with Journal Online’s Wally Peralta, Sam admitted that she is exclusively dating a certain “Fil-Australian champion surfer,” but refused to reveal his identity.

She also mentioned that she met the guy when she went to La Union for a show and decided to try out surfing afterwards.

On September 29, 2011, a video was posted by Luke on his personal Facebook account showing himself in the sunny beach of La Union teaching Sam and showbiz newbie Yam Concepcion the basics of surfing.

That is the same question boggling—and apparently outraging—fans of Sam and her former Pinoy Big Brother Double Up housemate Paul Jake Castillo.

In online fan forums, supporters of the Sam-Paul Jake loveteam are expressing their dismay over reports that their lady idol is being romantically involved with another man.

During the course of the reality show, which aired from October 2009 to February 2010, Sam and Paul Jake have developed a friendship that prompted many viewers to believe that a relationship is brewing between them.

However, during that time, Paul Jake was still involved with his longtime non-showbiz girlfriend named Denise.

On May 20, 2010, the Cebuano entrepreneur turned actor confirmed his breakup with Denise on the now defunct SNN: Showbiz News Ngayon.

This sparked rumors that the Bubble Gang actress might have been the third party in the relationship, but it was immediately quashed by both Paul Jake and Sam.

They admitted, however, to being very close friends even after PBB has ended.

They even went to the 2011 Star Magic Ball together despite Sam being already a part of the Kapuso network.

STATEMENT FROM SAM. PEP (Philippine Entertainment Portal) managed to ask Sam about the status of her relationship with Luke.

In a text message sent to us this afternoon via her management team from Viva Entertainment, Sam said, "Luke and I are just friends.

"We hang out and enjoy each others company but no commitments."