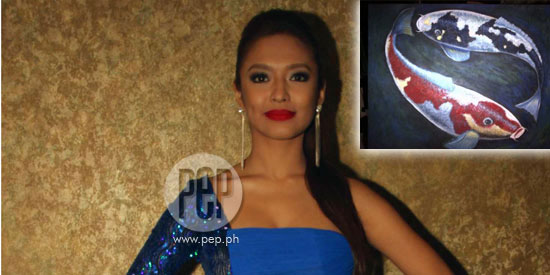 Bangs Garcia revealed that one her dreams is to open her own art café where she can showcase her paintings.

Bangs Garcia is deep into her new hobby: painting.

The sexy Star Magic talent only started doing artwork in November 2011, but already she has completed seven paintings.

Bangs says that her preferred medium is acrylic on canvas.

The 25-year-old actress admits that she did not have any formal training, but reveals that she has already mounted an exhibit of her paintings.

Bangs appears in Posas, the indie film that won the Best Picture award in the Director's Showcase category of the recent Cinemalaya Film Festival and which has just been invited to compete at the Pusan International Film Festival in Korea.

In Posas, plays a woman victimized by a cell phone snatcher played by the lead actor, Nico Antonio.

But the actress says enthusiastically that the art of painting allows her to discover her facet as a visual artist.

“Painting is something you can pursue until you get old,” Bangs pointed out.

Asked about her long-term plans for her new hobby, Bangs said with a smile: “Dream ko na magkaroon ng sariling art café at restaurant siya at the same time.

Even as a newbie artist, she already has customers willing to buy her paintings.

She said that one of her paintings was sold for the price of P150,000.

No doubt, her popularity as an actress has helped her gain followers in the art world.

How long does it take her to complete a painting?

"Mga six hours. Once I’m focused on something, I’m really into it,” explained the sexy actress.

How would she describe her painting style?

Bangs says her style of painting is very detailed. She believes that she got this eye for detail from her father who is an engineer by profession.

According to her, one of her trademarks is painting the Yin and Yang symbol, which, according to Chinese philosophy, represents two opposite principles in nature.

Bangs is currently finishing more paintings in preparation for an art exhibit.