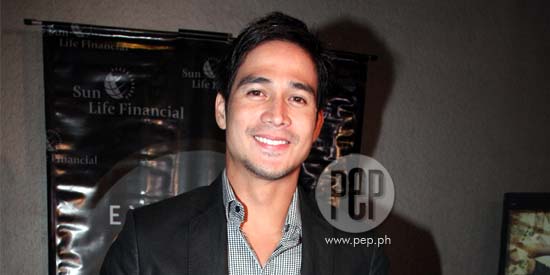 When asked about the rumored romance between his fellow Star Magic talents John Lloyd Cruz and Angelica Panganiban (not in photo), Piolo Pascual simply said, "Both are my friends."

At the gala night of Sun Shorts held on September 7, we saw a handsome star fixing the coat of another guy near the entrance of Newport Cinema 3 in Resorts World.

“My brother Choi,” Piolo Pascual said when PEP.ph (Philippine Entertainment Portal) approached him for an interview.

In public, we see Piolo Pascual as an actor, a singer, and a heartthrob.

But sans the camera, he's known for being a responsible son and a good brother. In fact, when the topic shifted to his homes in Los Angeles and Nevada that were featured in YES! magazine, he quickly replied, “It’s not mine…

“The houses are my family’s— my mom’s, my sister’s…

“So I’m staying there when I’m there, pero sa kanila yun.”

WHAT’S NEXT FOR PIOLO? We mentioned the numerous things he can do— photography, producing films, running, to name a few.

But when asked where he wants to invest more time and energy, he answered, “triathlon.”

His last bike event was last month, at the Cobra Ironman 70.3, where he finished the 90-kilometer route in two hours and 47 minutes.

Piolo continued, “I really wanna focus on triathlon, you know, it’s my passion…

“Every day, I wake up when I’m not working, I head to the course and swim, I bike, I run… I really find time… I make time for it…

Producing more films is also part of his to-do list.

“We’re talking whether there’s Kimmy Dora 3… But it’s hard to follow, siyempre, the collaboration between Joyce Bernal and Chris Martinez.

“With Eugene Domingo naman, I’m always open to doing a [project]… Eugene is a blessing. We became a production company because of her, di ba.”

The movie's part two hit the 100-million box-office mark in two weeks, and this— according to the main man of Spring Films— “kinda validated the group.”

The Kapamilya actor added, “We were very happy that all the hard work paid off.”

At this point, “puro meeting-meeting,” but in the next couple of months, he wants to do another film, which need not be another sequel of Kimmy Dora.

In addition, Piolo is also thinking of forming a partnership with Sun Life Financial Philippines, one of his endorsements.

Coming from the success of Sun Shorts that featured seven to eight-minute films of five directors, “I wanna do a full-length film,” said Piolo. “We’ll never run out of ideas for film concepts.”

WHEN’S THE RIGHT TIME FOR LOVE? Finding a real-life partner doesn’t seem to figure in his immediate plans.

When asked about his time frame, he answered, “Hopefully, of course, I don’t wanna be single when I’m 40.

“I just really want it to be right, you know, on a perfect time. So, it will happen.”

Can he describe his “ideal” love?

The 35-year-old actor-singer affirmed, “[She has to be] of the same faith… Definitely when it happens, everything will fall into place…”

But can he say he has already left the past behind?

A brief pause before saying, “I’d rather not comment on that because it might be misconstrued, so… it might be taken differently in the wrong [context].

“I guess it’s safe for me not to say anything.”

But he has no worries about the present, and will just wait for the future to unfold.

“For now, there are so many things I’ll probably be doing, so I don’t know… I don’t know what’s next.”