The birthday boy Perry Lansigan with the star talents he manages. Of them, he considers Dingdong Dantes (left) and Gabby Eigenmann (second from left) as his two "panganay."

Pelting rain did not prevent over 50 celebrities and showbiz folk from attending the 40th birthday bash of talent manager Perry Lansigan.

Held on the very day of Perry's birthday, October 15, at the Skye Lounge of the W building in Bonifacio Global City, the festive night was awash with limitless drinks, rich food, live music, and at least three very colorful birthday cakes.

Among the early birds was Perry’s prized talent Dingdong Dantes—who, despite his currently busy schedule, made time for the party.

Looking slim in a black long-sleeved shirt and dark pants, he mingled with guests, and told one of them, “Siyempre, hinding-hindi ko mami-miss ito.”

So even with taping ongoing for his new TV series, Genesis, launched just the day before the party, October 14, and his film, She’s The One, opening in cinemas today, October 16, the Kapuso Primetime King gladly switched to party mode.

He added, “Bonding na rin namin,” referring to his girlfriend Marian Rivera, who was reed thin in her sexy long black dress that night.

Gina’s son Geoff Eigenmann was also present. Those who hadn't seen him in a while, like the editors of PEP.ph (Philippine Entertainment Portal), said, "Wow, you're like a different person!"

Which was certainly true—and which was good news to people close to him.

That night, these people were visible at the ritzy party lounge, where bouncers and receptionists were first to make sure they felt welcome: Perry's family, Dingdong's family, the partners of his talents, Perry's high-school chums, a select number of press people who, as his friend and ally Rose Garcia put it, "were part of Perry's journey in showbiz."

PARTY HIGHLIGHTS. In the three batches of videos shown during the lively and brief party program, most of Perry’s friends wished him “good health” and thanked him for being a "professional."

Perry's company and household staff were amply represented, with each one coming up with a lively video message that left the birthday "Boy"—it was the evening's revelation: Perry has been called Boy for the longest time by close kin—looking both happy and uncertain about what he would hear next.

Executives from GMA, where Perry used to work as an executive producer, greeted him one after another in one video batch.

Atty. Annette Gozon-Abrogar, president of GMA Films and whose family is a major stockholder of the network, paid him the compliment of saying, "As a manager, mabait siya, madaling kausap."

More of the same praise came from Lilybeth Rasonable, Marivin Arayata, Redgie Magno, Darling de Jesus, and other high-powered bosses at the Kapuso Network. Most of these bosses were also seen toasting to Perry's good health at the predominantly black-outfit party.

But the birthday greeting that had the guests screaming was the one from Gerald Anderson, a Star Magic talent and a contract talent of ABS-CBN, whose video message ended with: "Sana ma-dinner kita at makabawi naman ako sa ‘yo.”

The singer-host didn’t make it to the toast and traditional singing of “Happy Birthday To You.”

Perry quipped, “Parating na,” to which everyone laughed. Janno's tardiness at everything—tapings, live shows, dinners—has, after all, become an industry joke.

The rest of his talents—Dingdong, Geoff, Jolina Magdangal, Angelika dela Cruz, Gabby Eigenmann, Max Collins, LJ Reyes, Rochelle Pangilinan, Carl Guevara, and Carlo Gonzalez—were ready and willing to join Perry on stage, where they raised their champagne glasses to the man responsible for steering their careers. 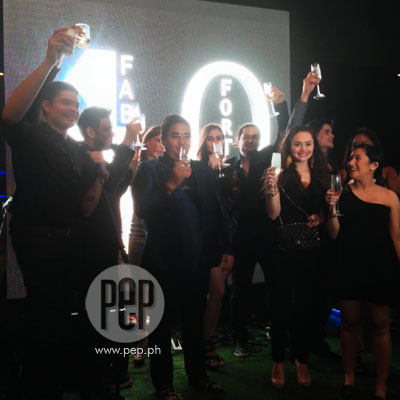 Not in photo is Arthur Solinap, who arrived around an hour after the toast, having come from taping.

The well-liked talent manager and entrepreneur also thanked the people who, he said, have been supporting him, particularly now that he has established his PPL talent and events management group.

He also acknowledged the presence of PAMI, the block of generally veteran talent managers. 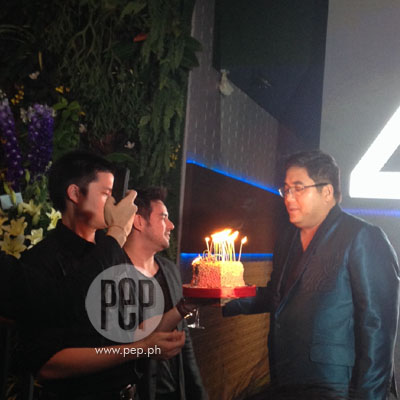 Here’s the list of celebrities and TV personalities we spotted: