Nadine Samonte welcomes 2014 with a shorter 'do.

The tail-end of 2013 saw a lot of female celebrities chopping off their long locks to sport a refreshing bob haircut.

Among them were Judy Ann Santos, Bea Alonzo, Bubbles Paraiso, and Ryza Cenon.

This year, Kapatid star Nadine Samonte is the first to join the style bandwagon that is reminiscent of the early '90s.

In an interview with PEP.ph (Philippine Entertainment Portal) editorial assistant Nikko Tuazon, Nadine said that this new look has nothing to do with her role in the upcoming TV5 show One of the Boys.

"Wala naman," the actress explained at the story conference for the show, held January 7.

Indeed, Nadine had always worn her hair long, almost to her waist. 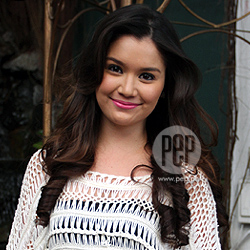 Nadine in 2013 during a shoot for her TV5 show Kidlat. Photo by Noel Orsal

How did her non-showbiz boyfriend react to her new hairstyle?

What can you say about Nadine's new look, PEPsters? Sound off in the comments section below.