Miriam Defensor Santiago reveals one stupid thing she heard in the Senate, her one pet peeve, and one-liner to Pope Francis 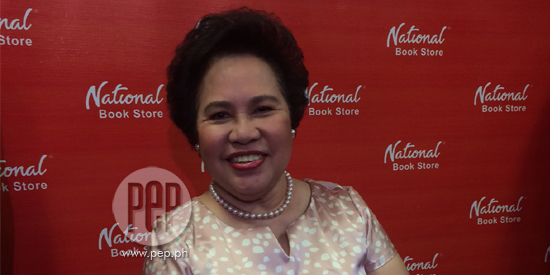 Miriam Defensor Santiago "would like to thank all the millions of stupid people in the Philippines" because they inspired her latest book, Stupid is Forever.

Senator Miriam Defensor Santiago was supposed to sign only 200 copies of her new book Stupid is Forever.

But she ended up signing hundreds more during the launching of her book at the National Book Store Trinoma last December 3.

Although the autograph-signing and photo op sessions were extended beyond expectation, the feisty senator maintained her composure.

Asked about her message to those who came en masse to see her, she answered like the strict teacher that she is.

"The advice is: keep on reading.

'And it appears that the gains for reading are all to be gained from print rather than from e-books."

Having been an exemplary student in all her studies, the senator has an open mind about learning methods.

She backtracked, "I don't know if that is correct or it's just some propaganda war going on.

"But all people will always be encouraged to read.

"I did very well in school because we had a United States Information Service, in other words, a free library in my hometown."

She recalled becoming a voracious reader at an early age, "... I used to walk, I think two miles to borrow a book and I had to borrow it in the name of my mother because I was underage.

"I think I was supposed to be 12 years old, but I started borrowing books when I was only nine years old.

"And I had to walk back and forth, which entailed some sacrifice on my part but it was well worth it.

"I decided when I entered the room that I would read all the books clockwise until I finished reading them, and I did."

Of course, another interesting part of the book launch was the Q & A with the press. Excerpts:

What are the stupidest things she has heard in the Philippine Senate?

She laughed loudly, "There's not one stupid thing.

"There are millions of stupid things I have heard in the Senate!"

She gave an example, "I like this answer the best in the entire Senate.

"There's always in the Senate plenary session, a so-called debate because someone will introduce a bill and the other person will try and question the bill as to its desired benefits.

"And sometimes, when a person who is sponsoring a bill is asked a question by another senator and the sponsor does not immediately know what to answer, he says, 'That's a good question, I like that.'"

What are the three pet peeves that tick her off the most?

She quickly replied, point-blank, "Maybe not the top three, just one: the Senate."

Does Senator Miriam have a one-liner for Pope Francis?

When asked to explain the context, she obliged, "Well, just to make him laugh because everybody pulls such a long face when he is around.

"And everybody pretends to roll his eyes upward and look very penitential or divine.

"So people should put a little bit of humor in the life of even the Pope."

She then launched into an animated comparison between her and the Pope.

"Because he shows, from what he has been issuing so far, that there is a very progressive trend on top.

"And for those who have studied theology, they know that we are classified into radicals or conservatives or progressives.

"I personally, for example, will be classified as a progressive.

"And I think that Pope Francis will classify as a progressive as well.

"So he would not take it... I don't think he will take offense at things like those."

So, what motivated her to write Stupid is Forever?

The answer was in the message she delivered during the brief program, "I would like to thank all the millions of stupid people in the Philippines because they inspired this book."