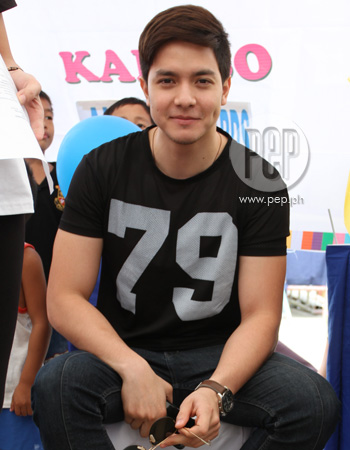 Instead of having a grand party, Alden chooses to take part in the charity activity of Habitat for Humanity, “I want to engage more on stuff and causes like these kasi mas may purpose and mas may silbi siya.”

Alden Richards chose a simple yet meaningful celebration for his birthday this year.

Instead of throwing a grand party, the Kapuso actor opted to dine out with family and friends on his 23rd birthday last January 2.

The Ilustrado actor also took time to help clear the debris in one section of the area. It was his second time to volunteer.

“I want to engage more on stuff and causes like these kasi mas may purpose and mas may silbi siya,” explained Alden.

"Workout 'to," says @aldenrichards02 who's currently helping other Habitat for Humanity volunteers in clearing debris in one section of Bistek Ville 1 in QC. #AldenBirthdayBuild @pepalerts @artistcenter

According to him, it was his personal request to have a “birthday build” when he became one of the organization's ambassadors.

“Noong pumasok ako dito, sabi ko rin, baka puwedeng on my birthday, we could do something for the communities na nagawa na or to build houses.

“For a change naman, kasi most of the time kapag birthday ko, I go to home for the aged, sa mga orphanage.

The actor promised to continue supporting the activities of the organization as long as his schedule is free.

At present, he's part of the weekly variety show of GMA, Sunday All Stars.

He's also leaving for Rotterdam, Netherlands on January 24 to represent Adol Alix Jr.'s short film Kinabukasan, which will be screened at the Rotterdam Internatonal Film Festival.