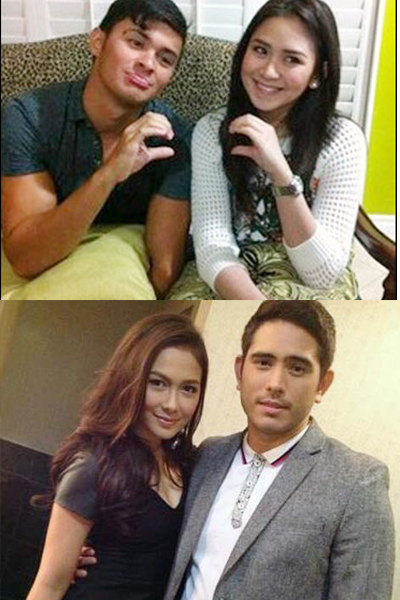 How would you like these couples—Maja Salvador & Gerald Anderson and Sarah Geronimo & Matteo Guidicelli—celebrate Valentine's Day?

Pop culture has kind of put a heavy pressure for people on February 14, the day when couples are expected to go out on a romantic date, and when adult singles are reminded of what’s lacking in their life—a partner or a better half.

The celebrity world is not spared from such V-day phenomenon.

Couples are expected to have that epic date, and singles are asked why they don’t have a romantic partner on that day.

We list showbiz’s couples that we love to see on a date this hearts’ day, and how they would or should date; and the singles that we wish would have a more colorful V day!

The Couples: Looks like they’re #MFEO (Made for Each Other)

Gerald Anderson & Maja Salvador. This couple had their first Valentine’s date in 2013, when Gerald fetched Maja off a building rooftop via a helicopter, which brought them to Tagaytay for a quiet lunch at Antonio’s Garden.

Gerald literally raised the bar to sky-high level when it comes to dating.

Did Gerald take his cue from Christian Grey, the fictional character who took Anastasia Steele to a helicopter ride across Seattle?

Matteo Guidiccelli & Sarah Geronimo. When interviewed on The Buzz in August last year, Matteo refused to give details about the exact date he and Sarah officially became a couple.

The two, however, have been linked as early as 2013, especially when Matteo attended Sarah’s birthday celebration last year.

That said, we can only surmise that this will be their second Valentine’s together.

Is a grand romantic date foreseeable? We wish!

This half-Italiano could surely treat Sarah with some sweet and romantic time, Italian style!

But fans also wish that their parents won't be in tow.

But it's Heart's 30th birthday so a fine dinner, while enjoying the luxurious Balesin sunset, is all set to happen.

Marian Rivera & Dingdong Dantes. We may think Dingdong has quite possibly exhausted all his romantic ideas to pamper his beautiful wife.

Barely a couple of months after the local showbiz’ grandest wedding ever, and more than a month after their European honeymoon, comes Valentine’s.

How else could Dingdong express his love for Marian?

But we can never underestimate this man. We’d love to see them doing something very simple this time, though.

Or, since Marian is looking forward to having a baby with Dingdong, a honeymoon part two?

Toni Gonzaga & Paul Soriano. This newly-engaged couple could have a very special and different kind of Valentine’s together, now that a wedding is in sight.

Should they go out on a romantic dinner date, a bottle of a sparkling Dom Perignon would surely complement the sparkle on Toni’s 2M peso engagement ring.

Ai-Ai delas Alas & Gerald Sibayan. We don’t care who’ll foot the bill. We’d be happy to see this couple on a date on V day, just to prove to the world that love is for all ages.

Aiza Seguerra & Liza Dino. This couple should go out and be proud of their love, and not mind what the prudes say.

Daniel Padilla & Kathryn Bernardo. They are mum about their relationship status.

But surely, if they go out on a date on V day and let the moment be snapped by the paparazzi, their fans will go wild and crazy, like good wild and crazy.

That will be best for their upcoming movie and teleserye.

Jericho Rosales & Kim Jones. Lying on the beach. Listening to the sound of the ocean. Riding the waves. Will these beach and surfing lovers opt for the open waters on V day?

A dressy, quiet night in a posh restaurant? Some private moments at home, perhaps?

Anne Curtis & Erwan Heusaff. Why go out on a restaurant date when this Fat Kid Inside chef can just delight Anne with many of his kitchen creations?

After a sumptuous meal, Erwan can whip up a special cocktail for some romantic downtime.

We’d love to know the guy who goes with the box-office king to Burger King drive thru, and keeps him happy and inspired.

This is how this couple’s relationship has evolved so far.

They can strengthen it this V day and go out somewhere quiet, away from the party clubs they used to frequent, and talk about their unpredictable love and devotion for each other.

John Lloyd Cruz & Angelica Panganiban. Lloydie wasn’t able to escort Angelica at the premiere night of the critically-acclaimed film That Thing Called Tadhana, so he might as well take Angelica on a movie date this weekend, and know for himself if their relationship is a thing called tadhana.

“Yes, there’s a label. But you want to make it like you're always trying something new," said the 20-year-old Kapuso actor. Well, Elmo, this V-day is the day when you can try something new, romantic, sweet and memorable.