No baby plans yet for Kim Jones and Jericho Rosales 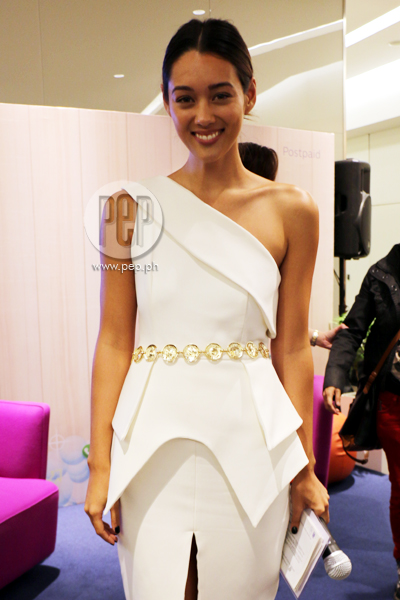 Kim Jones on being married to Jericho Rosales: “It hasn’t really been a huge adjustment. It’s been quite, I guess, it’s been organic. It’s been very natural. It’s been very seamless and very smooth. We’re still growing together and we still want to focus on our careers and, yun, it’s a very beautiful time in our lives now. We’re very blessed.”

The couple have been together as husband and wife for almost a year now since tying the knot May 2014 in Boracay.

PEP.ph (Philippine Entertainment Portal) and other members of the press caught up with Kim at the launch of Globe’s myLifestyle plan on Wednesday, February 11, at the Bonifacio Global City, and talked about her adjustments now that she’s married to Jericho.

Kim said, “It hasn’t really been a huge adjustment.

“It’s been quite, I guess, it’s been organic.

“We’re still growing together and we still want to focus on our careers and, yun, it’s a very beautiful time in our lives now.

Is there a downside of marrying a celebrity?

Kim answered, “There is no downside marrying a celebrity.

“It’s just one aspect of his life, so there’s a lot more to Jericho than just his celebrity status.

“That’s just one part of the many parts of our relationship, so it’s fine.”

BABY PLANS. Ten months into their marriage, Kim and her husband still want to focus on their relationship and their careers before starting a new chapter in their lives—having a baby.

Kim told the press, “Family is definitely something that’s on the table right now.

“But it’s not something we see in our immediate future, you know.

“We both want to focus on our careers, our professional lives.

“But I just don’t feel it’s something we’re thinking about.”

Kim wants to solidify her brand in the country before they start a family.

“I want to sort of solidify my brand here in the Philippines.”

Kim continued, “I would like to see myself doing, you know, more collaborations.

“Whether it’s with the Department of Tourism, with local brands, local designers.

“I think it’s a really good time to be in the Philippines.

“It’s such a great, strong economy. You know, we’re more open to, I guess, the presence of global or international brands.

“So, I think the possibilities are endless, so I don’t want to limit myself.

“I guess, I just want to keep on doing what I’m doing, and go from there.”

WITHOUT INTERNET. Kim also talked about how she and husband Jericho use social media to maintain a healthy relationship. But first, PEP and other members of the press asked Kim about her digital lifestyle.

She said, “I’m embarrased to say it, but like today, I spent like… I can’t even calculate it.

“It’s such an important part of my life, that I probably spend more time on it, than I do off it.”

Kim starts her day reading news stories on her smartphone or tablet.

She explained,“I like to read, so I love to keep up with, I guess, news in the fashion world.

Facebook, Twitter, Instagram, Viber, and Waze are five of her favorite smartphone apps. Kim and Echo use these social media and messaging apps to maintain their connection with each other because of their busy schedules.

The Filpino-British host said, “I mean, we spend a lot of time talking to each other.

“We’re not always together.

“We actually live separate lives so it’s a way, I guess, to stay connected.

“We send each other videos, images, whatever, yeah… just to stay connected.”

Can she imagine married life without Internet?

Kim answered, “It would probably be… interesting.

“There’s just a lot of information there.

“But at the same time, you know, moments like these, when we’re not together, it’s an incredible tool to stay connected.