Why Bangs Garcia cut her hair? 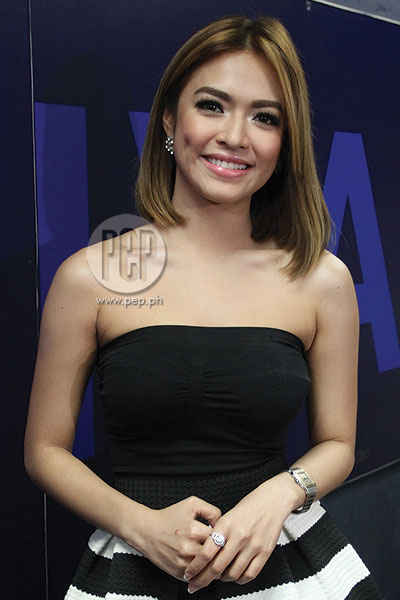 Bangs Garcia is currently dating a half-British, half-Filipino businessman, after she and Phil Younghusband came to a decision they're better off as friends.

It shows in her appearance, image, career.

Even in her lovelife, Bangs is about to bring a lot of changes.

First off, the actress has decided to wear her hair shorter, which she has always worn long since she joined showbiz in 2006.

At her contract signing with Viva Entertainment Inc. last Thursday, March 5, the actress was teased by the press about her new haircut.

Could it have anything to do with the state of her heart?

“Two years ago, I’ve been planning to cut my hair. I was just waiting for the perfect reason.

“So parang a breath of fresh air, parang something very new.

NEW IMAGE. Even more surprising was her decision to move to Viva after being with Star Magic for the most part of her showbiz career.

However, she clarified to PEP.ph (Philippine Entertainment Portal) that she maintains an amicable relationship with the talent arm of ABS-CBN.

With that, Bangs also announced her desire to establish a new image.

“Siguro I’ve proven myself in that part.

"Medyo napaaga ngayon, e, so ngayon back to zero, back from the start.”

A three-time FHM cover-girl, can Bangs pull off a wholesome image convincingly?

Her candid reply, “I don’t think so."

She elaborated, "When I say that hindi ako magse-sexy ngayon, I’m never gonna take that away from me.

“I just don’t wanna be redundant.

When the press commented on Bang’s slimmer figure, the actress pointed out that she has been working out more often.

"Kasi when you work out, you release more serotonin in your body, so mas nagpo-produce ng happy thoughts.”

“Then next, I’m going to paint a panda and dolphins and a chameleon, puro mga animals.”

She was hard-pressed to come up with a suitable justification for her choice of motif, but she had a concrete explanation for painting a panda.

“May tumatawag sa akin na Maganda Panda, sabi ko, ‘Panda is so cute, why not paint a panda?’

"And then when I researched, partly Chinese yung mom ko, may mga superstitions, she believes in Chinese astrology.

"When I looked up the symbolic meaning of panda, lucky siya. It means profits, gains.

“I wanna be my own chef in my restaurant in the future.

NEW INSPIRATION. As for her lovelife, Bangs revealed that she and Azkals football player Phil Younghusband have stopped dating since last year, after six months of exclusively dating.

“We’re better off as friends. One thing I’ve learned in 2014, it doesn’t mean that [since] both of you are nice in a relationship, you’re gonna work out as a couple.

She was also forthright in being open about dating someone new, a half-British, half-Filipino businessman.

She recounted how they met in Boracay, hit it off, and realized that they clicked.

The guy is now back in London, but he keeps in touch and will be back next month for a month-long stay.

“Pero we’re still trying to get to know [each other], but he makes me smile,” Bangs beamed.