Iya Villania will do anything with hubby Drew, except a teleserye: "Not just weird, but impossible!” 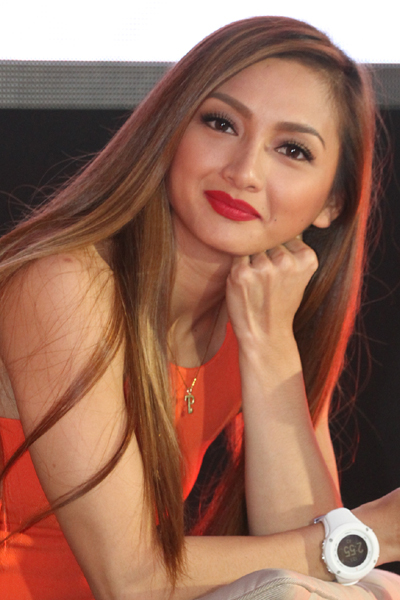 Iya Villania explains why she loves lifestyle-themed shows: “I love how a lifestyle show works where you feature different things all the time, different activities, different restaurants, different places, different people, and it just keeps every taping day exciting.”

From their courtship to this time as husband and wife, showbiz couple Iya Villania and Drew Arellano have managed to keep their romance low-key, a rare occurence in an industry that thrives on public adulation.

Last Valentine's Day, for instance, was spent quietly in their new condo.

“I think more than anything, it's just about getting time in together. Actually, whoever comes up with a plan first, we kinda just go with that.”

She continued, “The first time we celebrated Valentine's, we were in Batanes, it was our first year married, and the first time I joined him for an out-of-town trip as his wife, and for work also.

“Drew and I love Batanes and we actually wanted to have our wedding in Batanes.

“It was just because of logistics, it would have been too difficult. So it was nice to go back but just as a married couple and on Valentine's Day pa.”

LOVING IT. When PEP.ph (Philippine Entertainment Portal) caught up with Iya Villania-Arellano during the taping of Taste Buddies, her new show which she co-hosts with Solenn Heussaff, she graciously chatted with us about the progress of her career since she transferred to GMA7 from ABS-CBN last year.

Apart from Taste Buddies, a lifestyle-magazine show on GMA News TV airing Saturday nights, the ever-smiling host is also in Sunday All Stars (SAS) on GMA-7, which airs Sunday afternoons.

She said her Kapuso experience “has been great, I've been loving it, I've been enjoying every bit of that transfer.”

As she described it, “I love that I'm making new friends, I love that I am getting to know people more.

"I love that I am given the opportunity to work with other talented artists, and I'm just loving the environment.”

Has the transfer been made easier by the fact that her husband is also a Kapuso? Drew is one of the network’s primary public affairs hosts.

That made her laugh, “No, not at all, but it makes it easier knowing that my husband is in the same network. So there is a chance that we can work together.

“I guess the thing that makes it easier is that everyone has just been nice to me.”

LIFESTYLE BEAT. Looking back, Iya shared it helped that she had been acquainted with some Kapuso artists in some random projects while she was still a Kapamilya, “so I wasn't completely a stranger to everyone.

“I think it also helps that I am a nutbag, and so I'd like to think that I break the ice easy and fast.

“So I think that makes it easier also so people don't have to be afraid, to be stiff around me.

"Or I don't have to be afraid I'd think weirdly of other people because I am weird myself.”

Work-wise, she said she considers her hosting stint on Taste Buddies very close to her heart, “I love it because it is something that is so familiar to me.

“I love lifestyle because I came from US Girls, six years of doing that and it's quite similar.

“I love how a lifestyle show works where you feature different things all the time.

On the day we caught up with her, she had just finished wall climbing and was taping a segment where she did a karaoke face-off with two wonderful singers. She was also gearing up for the show’s final portion on how to do some household hacks using everyday items.

She said, “I love that I get to work with SAS, I love the staff and then a lot of them also work with Drew.

“It's actually a small industry in terms of staffing production, so a lot of them do the other shows also in GMA.

“A lot of them are people I was already working with in SAS. Or they work with Drew for Biyahe ni Drew.

"It's nice that I am able to work with all these people.”

TOGETHER AS HOSTS? Now that Iya is a full-fledged Kapuso, has their house dynamics changed?

She blurted out, laughing, “It's a house full of love! Well, it's the same thing, it's not like we're doing the same shows.

“We're still two individuals talking about our individual schedules and work. It's still pretty much the same.

People have been speculating since last year whether she and Drew will have a show together.

“Oh, definitely. We talk about the possibility of working together, but nothing that we're holding on to too tightly. It's just a nice thought.

“Of course it's not up to Drew and me, but if the network considers giving Drew and I a show, that would be great.

“If anything, the one thing we do talk about is doing a show that we both would want to do. And that would entail no drama!

Not acting or a teleserye together?

“That would be impossible! Not just weird, but impossible for the two of us!”