Saab Magalona on why you should marry your best friend 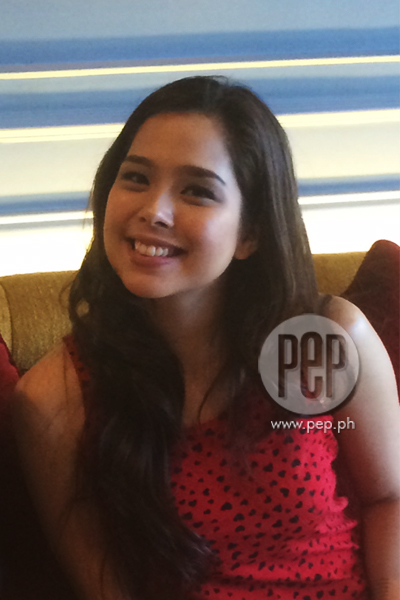 Saab Magalona explains why you should marry your best friend: “Somehow I feel na it's possible for you to cheat on someone you love, but you really never want to hurt your best friend, 'di ba?”

That's what stylebible.ph called the wedding of bandmates Saab Magalona and Jim Bacarro when they got married in a simple but unusual ceremony in Baguio on January 24, 2015.

Hashtagging their wedding as #JimandSaabsavetheworld (because weddings are all about hashtags and monogram logos of the couple's names these days), it was obvious the daughter of rap legend Francis M and Pia Arroyo is one cool chick.

On one such taping day, PEP.ph (Philippine Entertainment Portal) ran into Saab, who was then wrapping up her segment at Balboa, an Italian-American restaurant at the Shangri-La Plaza's East Wing.

Saab says she loves the vibe of the resto, where pasta is made by hand and infused with different playful colors.

She segues to her wedding night. “We ordered two bacon cheeseburgers. We were eating it and we were so drunk from the festivities and we just said, 'So what's gonna change?'”

BEST FRIENDS. Has anything changed since they got married?

Saab grins widely, “We're best friends, and parang like we were laughing, eating burgers, it was just like we were in high school.

“Parang we were just laughing. It felt really great na there's no pressure to be a certain way. We're not gonna change.”

She adds her two cents on what she has learned about being married to her best friend.

“Kasi, you know, it's just different for me. Somehow, I feel na it's possible for you to cheat on someone you love, but you really never want to hurt your best friend, 'di ba?”

HOME MAKEOVER. Saab says one thing that got her excited about settling down was the prospect of redecorating Jim's condo. She gave up her own condo and has moved into Jim's erstwhile bachelor's pad.

She describes the changes she has made. “I repainted the walls, yun pa lang. He only has a bar in his kitchen, so we're finally getting a dining table.

She tapes regularly for Taste Buddies and even though it's a lifestyle show, her segment focuses on eating. Does she want to become a domestic diva after trying out so many dishes every week?

Saab says, “We've been to Japan and I'm fascinated with their whole minimalist vibe, so I just like na it's very clean.

“I like whites and browns and wood. I'll try, pero ang dami naming abubot! Yung non-negotiable ko is I wanted to turn his second bedroom into my library office.”

HAPPY WITH HOSTING STINT. Right now, she's committed to do one season for Taste Buddies. What are her plans after? Is the home office her non-negotiable so she can devote more time to her blogging, perhaps?

“Ako, I really enjoy, I mean what's not to love about being a segment host in Taste Buddies?

“It's pretty much what I do when I go out and instead of just blogging about it, it's shown on TV.

“I really love blogging, I've been doing it for ten years. I really like writing about my experiences, trying to help out other people discover new things and activities,” she beams.

“So it's not a conscious effort naman for acting to take a back seat. Not really. We have more projects in store.”

BAND PLANS. On upcoming projects, especially for the band, what direction are they taking?

Saab shares she is very happy that their band podcast is coming together. She has a TV show for regular visibility, and as for Jim, she's happy he's moving up career-wise.

The proud wife shares, “Si Jim naman he's sales and marketing manager. He just got promoted at JB Music, so it's really good.”

She explains, “Actually, si Jim has been postponing his MBA because we love the band so much and it's taking off right now.

“We can't leave the band talaga. We love them so much. We're gonna see. This whole year, if it's talagang solid, we're gonna release our album kasi. So if it's really good...”

The couple have been together for a good number of years. How has this affected their band dynamic?

She smiles mischievously, “I think, mas maiinis yung band kasi si Jim calls me Mrs., gano'n, but I don't think anything much is gonna change.”

BABY PLANS. Now that she has joked about having kids, how big a family does she want?

“The plan is to have kids but in three to four years. We just want to travel muna, and spend time with my dog, Joey,” Saab says.

She continues, “Coming from a big family, it's really fun pero I can see na sakit kami sa ulo ng mommy namin, so I think we'll keep it small muna!”

She credits a three-day retreat organized by CEFAM (Center for Family Ministries) in helping her and Jim transition from best friends to married couple.

Saab shares, “We took the Discovery Weekend before we got married, it's a really good program.

“You really get to know each other and you talk about those big plans, to know if you're really compatible, what family you want in the future, how you relate to each other's families, trying to see if there are any problems, doon mo mailalabas.

“Also, talking about money, it's stuff na most couples tiptoe around so it was really good na we took that and I recommend it.”

THE VALUE OF INDEPENDENCE. Saab is happy she made the early decision to live on her own, as it is helping her adjust to living with someone now.

She tells us, “Ako I'm really happy na I got to live on my own for a long time before getting married.

"Kasi kunwari you're sheltered and super spoiled by your parents, it's such a... sobra kang masisiraan ng ulo to be on your own, and to live with another person who is not...who you didn't grow up with.