Cherie Gil: “I think I want to be dating myself for now.” 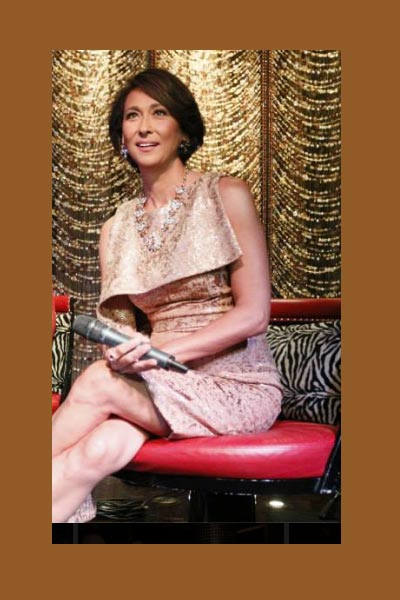 On Being a kontrabida, Cherie Gil says, "...it ain’t easy slapping people. So when it gets physical, that’s when it becomes really difficult.”

However, almost seven years after she and ex-husband of 20 years Roni Rogoff parted, she has stayed single.

And it’s her personal choice not to date as of the moment.

“Oh, thank God for Facebook now. I get busy with that," she told PEP.ph (Philippine Entertainment Portal) during the launch of her endorsement Acer recently.

“No, I don’t. I go out with my friends, with family, people significant in my life, I go out in groups.

“And when I’m not busy working, I try to take a trip to New York to visit my kids as often as I could.

“At this point of my life, I think I have a very little space left for small talk.

“But not to say that I’m not denying that it would be nice, makes me feel like desired and wanted, who wouldn’t want that.

“But so far, I’m in a very small circle.

“So, outside of the work, I have to live. I go where my kids are so I really have no time for that."

“I THINK I WANT TO BE DATING MYSELF FOR NOW.” Cherie said she is currently at the stage of her life where she's thinking more of self-growth and self-discovery.

She had this realization after the death of her brother, the late actor Mark Gil, last year.

“I am also in my place in my life where I try to figure out a lot of self-discovering and people have branded it as many things, with life, whatever they want to call it.

“And just talking about passages and half a century old, it sounds really old when you say it that way, but I’m on my fifth decade.

“So, you know, at this point, you try to consolidate and zero in on those things that really matter so that you don’t waste time.

“This, I learned a lot from the recent passing of my brother, and it’s barely six months.

“So I’m still on that whole phase of figuring it out, and dealing with the big loss.

“And in fact, what keeps us steady is that is this, my work, the people I meet, the people who continuously encourage me, and acknowledge the work I have done.

“And it’s too swift to move on, in which direction I still don’t know.”

One thing she's certain about: she wanted to rest (temporarily) from show business.

“At this point, I would like to take a break.

“I haven’t yet announced exactly what I’m going to do, because I still don’t know, and it’s okay not to talk.

“I think it’s a good moment to be still for a while.

“I think I want to be dating myself for now.”

STAYING FIT. Despite her age, Cherie maintains a slender figure and a youthful look, as if she has not aged at all.

“I’m not as frequent as I used to, I used to run, I used to swim, I used to yoga quite consistently, in fact, almost everyday.

“But maybe because I started dancing when I was young and the body tends to look for it.

“And the fact that I’m active in that sense, I try to keep myself active, [it] helped me sustain that.

“So if I rest a bit from it because you can get a point of a burn out, I have to say that, it kinda like, you know, paid off.”

She also thanked her good genes. Her parents are veteran actors Rosemarie Gil and Eddie Mesa, both now residing in the United States.

“And of course genetically, I was also born from good genes. My dad is very fit, very much health buff.”

PLAYING KONTRABIDA. Of course, we all know that Cherie made her mark as kontrabida in the 1970s movie Bituing Walang Ningning, where she popularized, “You’re nothing but a second-rate trying hard, copy cat!”

With her track record in playing a villainess, has it been always easy to play such role?

“Nothing is always easier, each role that is demanded of me always is something I put a lot of myself into, and as much as possible, my own creative truth to it.

“There will always be a part of me that is lone to every character.

“But kontrabida is not easy, it ain’t easy slapping people.

“So when it gets physical, that’s when it becomes really difficult.”

Cherie’s last kontrabida role was for the period drama Ikaw Lamang (2014), where she played Miranda, and in the weekly fantasy show Wansapanataym presents My App Boyfie, which is now enjoying a re-run every weekday mornings.