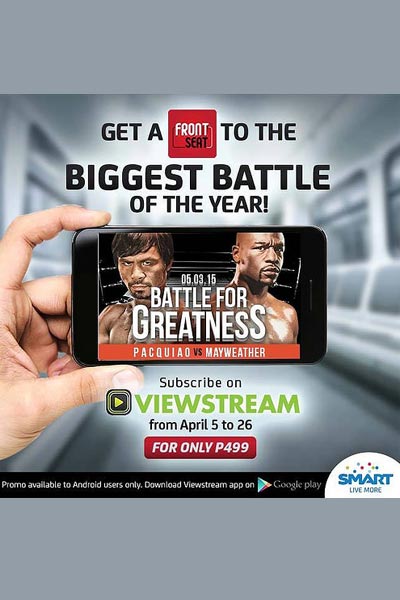 There are several ways to watch Manny Pacquiao-Floyd Mayweather's Battle for Greatness on May 3. The most convenient is via mobile and this android app called Viewstream.

As May 3 approaches, the clamor for tickets to the Manny Pacquiao versus Floyd Mayweather Jr. bout is getting more intense.

From celebrities to ordinary folk, it seems everyone wants to witness the “fight of the century” live at the MGM Grand Garden Arena in Las Vegas.

As it happened, in less than a minute that the 1,000 tickets (Top Rank promoter Bob Arum said 500) to the fight were made available today, April 24, they were sold out.

According to BBC Sport, “The remaining 15,500 seats will go to fighters, sponsors, and promoters.”

Manny’s camp reportedly has been allocated 200 tickets of which 50 are set aside for the boxer.

But in an interview with ABS-CBN's Bandila, Manny told Dyan Castillejo that he actually bought tickets for his family.

Most Pinoys will be happy to watch it via television or pay-per-view.

Pacman’s hometown General Santos, and Saranggani where Manny’s wife Jinkee is the vice governor, will definitely have a public viewing.

PEP.ph (Philippine Entertainment Portal) lists down ways you can be part of the big event when the entire country will surely come to a standstill.

For only P499, you can watch it on your mobile or android device ad-free. 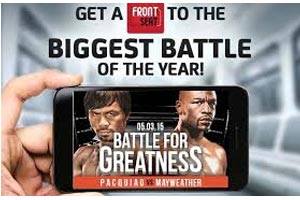 This is available to all Smart, Sun Cellular, and Talk N’ Text subscribers. Payment is done via prepaid load deduction or postpaid bill charging.

You will also get exclusive access to Pacquiao’s training videos shot in the U.S. as well as videos of previous Mayweather fights.

What's the thrill about it? The HD (high-definition) and 32-foot screen of Smart Araneta Coliseum. 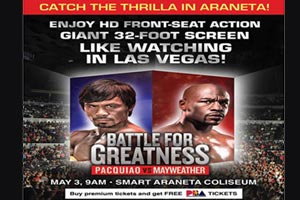 SM Cinemas. Six cinemas in SM North EDSA, four in SM Mall of Asia and SM Megamall, and one in each remaining SM Supermalls; tickets are priced at P800 for regular cinemas (P600 in the provinces), P1,000 for HD, and P1,200 for IMAX theaters.

Ayala Cinemas. Seven cinemas in TriNoMa, four in Glorietta and Market! Market!, three in Harbor Point and Fairview Terraces, two in Alabang Town Center, Ayala Center Cebu, and one in remaining Ayala-owned malls; tickets are priced at P800, except for Cinema 3Z and 7Z in TriNoMa, which charge P900. 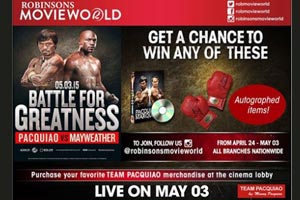 4. WATCH IT THE SOSYAL WAY 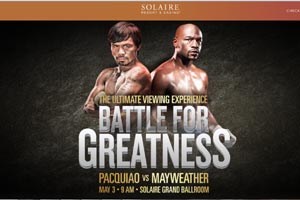 Isla Ballroom in EDSA Shangri-La: P3,647 with brunch buffet and one round of drink

Harbour Tent in Hotel Sofitel Philippine Plaza: P3,000 with international breakfast and one round of drink

HBO Boxing and Showtime: around $99

Have the patience for the seemingly-never-ending TV commercials and quite-distracting ads though.

PEP’s brother website SPIN.ph will have one in Friday’s in Glorietta. 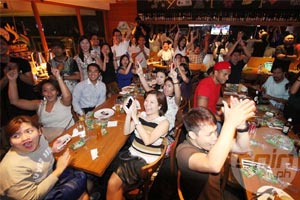 8. Eat while watching and cheering and shouting (for the multitaskers!)

Restaurants and sports bars bundled it with their food and drinks. Interested? Hurry because as early as April 15, most slots have been taken.

9. The plaza, the barangay halls

These venues are usually filled with so much energy and noise and even pawis so please bring fans and hankies. 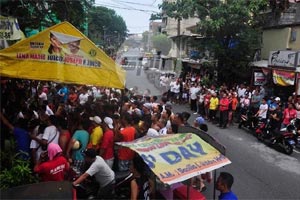 10. Lastly, there’s the reliable (in case there's a power failure that day) live broadcast (and annotation) of AM radios!