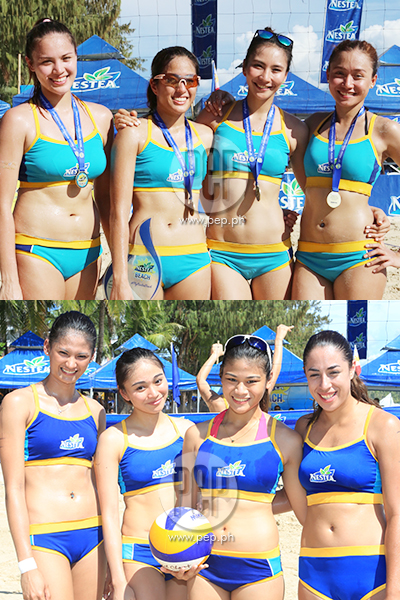 They played against the Dark Blue team of Dindin Santiago-Manabat, Tricia Santos, Amy Ahomiro, and Mela Tunay last May 1 and 2, 2015, at the Boracay Beach Chalets.

This is also the first time Gretchen played with Rachel Anne, former player of the Far Eastern University Lady Tamaraws; Michelle and Cha, who played for the De La Salle University Lady Archers.

“And then, tawa lang kami ng tawa kunware pag may nagkamali. Pero we were also very competitive so, it was fun.”

Gretchen admitted that it was fun playing with her former rivals in one team.

“They’re all excellent players and to play with them is a good opportunity to be on the other side naman.

According to Gretchen, they all had to adjust because it's different playing beach volleyball and indoor volleyball.

“Minsan breaks of the game, mas mabilis mag-shift yung momentum from one side to the other kesa sa indoor.

But what is the hardest part of playing beach volleyball?

Gretchen answered, “The hardest part would be the sun, the weather.

“So sanay kami sa ganun pero ako I trained for beach volleyball for the past months.

Gretchen admitted that she and her team had a setback on the first set of game 2.

“So we stepped up our game and sabi naming consistency lang.

“So it was more of acknowledging our strengths and weaknesses kaya nag-work kami together, okay kami.”