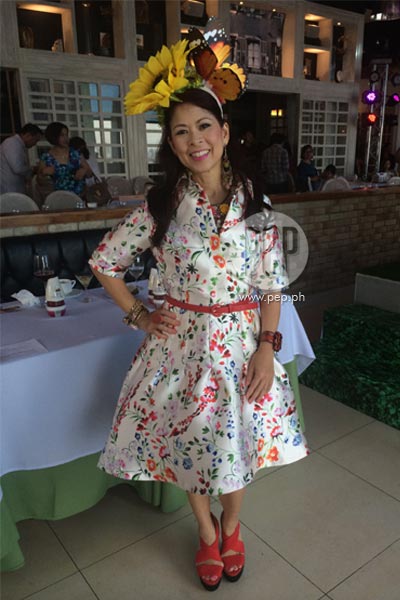 Tessa Prieto-Valdes shares how her newly-discovered scents fit right into her role as homemaker: "I think this one is really a home product, so it fits my background na interior design.''

When Tessa Prieto-Valdes recently hosted the first launch of the Renuzit line of air fresheners at Le Jardin in Bonifacio Global City, she said it transformed her old notions about room scents.

The socialite remarked, "I think this one is really a home product, so it fits my background na interior design.

“So whenever I'm hosting a product na it's either for the home or office, it's easy to relate. It's home, it's something I am an expert at."

She candidly admitted, "I can't say I'm an expert at beauty or beauty products but it's really… some people even mistake me for a fashion designer.

"But interior design is really my first love and passion."

NEW DISCOVERY. While Tessa has always been a scented candles person, along with scented sprays, she explained she's turning over a new leaf.

"I have a lot of room sprays or linen sprays but that again, it's just temporary. Now that you have something and you can enter a room and smell, that's something else."

Tessa said she preferred scented candles before because she feels they lasted longer.

But during the launch, Tessa found that Renuzit’s air fresheners, unlike scented candles, are something you can just leave behind and not worry about.

She remarked, "I think this one is great for smaller rooms where it can contain the scent like the bathroom or a study, and I like to smell myself so I wanna make sure my scent is there."

"It's nice how you can control the scent and you know how dispensers when are when you open them. The scent evaporates almost immediately.

“At least this one, you can really control the scent and how much goes out, a nice feature to have."

She also recalled her encounter with the brand in the U.S. a few decades ago, when its raspberry variant wasn’t as popular as it is in the country now.

"It wasn't raspberry. That was almost 20 years ago.

“I can't remember, but I think they had a sort of like a lemon grass, more like a lime something.

“More citrusy, but I didn't know it was here and now that I know it's available here, it's actually very adorable. Now I'm gonna use it in my car!"

In addition, Tessa also realized that the brand's unscented Super Odor Killer is great for her kitchen.

She doesn't cook, but she observed, "I hate the smell of food, garlic, onions and stuff like that, that's why I don't cook."

Forever on the lookout for a way to bust those unpleasant smells, she exclaims of her new discovery, “I didn't even know it until today. It's nice that it really kills the scent of the other unwanted smells and everything."

HOME-FRIENDLY APPLICATIONS. Tessa is also glad that just like her, pet owners can now be assured of a way to deodorize their homes even with the ubiquitous presence of their furry friends.

The cat lover explained, "Although they don't really smell, it’s good just to make like a nice touch-up.

After encountering the eight available scents being distributed in the Philippines, she is starting to see where else she can use them.

"I also hate it when… what's the English word for kulob? That musty scent when a room hasn't been used for so long?

“So it's nice to have that one especially if you have rooms or storage areas that don't really get opened all the time so it's really good to have that scent."

So if you've been dealing with stinky trash by leaving used fabric softener sheets in the bottom of your kitchen trash can and compactor to absorb odors, you can keep doing that or you can conveniently place a Renuzit bottle in a strategic place to absorb the stinky smell instead.

Or we've heard of people using a clean sock filled with dry coffee grounds inside to deodorize the area in and around the refrigerator.

Or when people cook with sharp-smelling items, like fish or cabbage, they place a small bowl of white vinegar on the stove to absorb the odor.

REAL ESTATE TV SHOW. Tessa said there's something else that also adds to her excitement these days.

"I'm so excited because I'm the new host of Philippine realty TV on ANC, a show on real estate on Sundays at 8pm."

What will viewers expect in this latest show of hers?

She replied, "It's like, real estate primarily but it also features interior design, and different projects and new restaurants, hotels, furniture companies and shops.

“Because now I think there's a lot of condos that are coming up, so now there's a demand for furniture, you know, na affordable and functional as well."

TRAVEL. Her other plans for the year include a lot of traveling.

“My niece is getting married in Spain so I'm going on another holiday soon. For me, traveling is the joy of life.

“It's really discovering the world and it's the only time I can really be solely a mother and a wife.

"When I'm here, there's always a work thing so it's nice to have or incorporate that travel in my busy schedule if I have time, but in the end it's really family."

She's also redesigning her home into a summer theme, naturally to fit the season and also because she landed a new endorsement for Mandaue.

Tessa shared, "They actually have a lot of furniture for the outdoors. They're from Cebu, they were originally just mattresses but now they have these outdoor like PVC material that they weave, and they also have beach umbrellas and then dining sets.

“That's changing for the summer. Orange and aqua, it's bright, the sea and a combination of sunshine and the sea!"